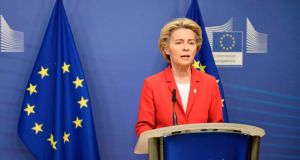 The European Commission began formal infringement proceedings against the British government on Thursday for breaching “good faith” through its Internal Market Bill.

The Bill currently making its way through parliament reverses aspects of the EU-UK withdrawal agreement signed last year and “would flagrantly violate” agreements made to avoid a border across the island of Ireland, the commission said.

The Bill has passed all stages in the House of Commons and has now gone to the House of Lords. It is not likely to become law before late November or December

“This draft Bill is by its very nature a breach of the obligation of the good faith laid down in the withdrawal agreement. Moreover if adopted as it is it will be in full contradiction to the protocol of Ireland-Northern Ireland, ” European Commission president Ursula von der Leyen said.

The EU had warned Britain that it would “not be shy” in taking legal action and gave London until September 30th to remove the problematic parts of the Bill.

“The deadline lapsed yesterday, the problematic provisions have not been removed. Therefore this morning the commission has decided to send a letter of formal notice to the UK government. This is the first step in an infringement procedure,” Dr von der Leyen said.

The commission informed the British government of the impending legal proceedings in a letter of formal notice on Thursday, and gave London one month to respond.

The announcement raises the stakes as crunch talks between Britain and the EU continue this week to try to avoid the prospect of a British no-deal exit on January 1st, with the two sides still divided over issues such as fishing, state aid, and governance.

EU member state officials have warned that it will be impossible to agree a deal with Britain if the Internal Market Bill proceeds in its current format.

The Bill gives British ministers the power to “disapply” rules for goods travelling from Britain to Northern Ireland previously agreed with the EU and signed into law, in what the commission said would be a clear violation of the Northern Ireland protocol.

“Representatives of the UK government have acknowledged this violation, stating that its purpose was to allow it to depart in a permanent way from the obligations stemming from the protocol,” the commission said in a statement.

“The UK government has failed to withdraw the contentious parts of the Bill, despite requests by the European Union. By doing so, the UK has breached its obligation to act in good faith.”

A British government spokesman said London would respond to the letter “in due course”. “We have clearly set out our reasons for introducing the measures related to the Northern Ireland protocol,” the spokesman said.

“We need to create a legal safety net to protect the integrity of the UK’s internal market, ensure ministers can always deliver on their obligations to Northern Ireland and protect the gains from the peace process.”

Taoiseach Micheál Martin met with Dr von der Leyen as the infringement proceedings were launched and is set to address the 26 other member states of the EU to give the point of view of the country most affected by Brexit.

Mr Martin is expected to tell the leaders that he believes British prime minister Boris Johnson does want to reach a deal, though the British side has yet to offer a compromise that could unlock progress in the negotiations.

“It’s our position, it’s Europe’s position, that the Internal Market Bill should be withdrawn, has to be withdrawn,” Mr Martin said. “The mood seems better for the prospects in terms of prospects for negotiations but we have some distance to go yet.”

Northern Ireland’s First Minister, the DUP’s Arlene Foster, said the EU’s move to take legal action against the UK over the Internal Market Bill came as “no surprise”.

“The EU always look to legal remedies instead of actually trying to find a negotiated way forward, so not at all surprised,” she told reporters at a press conference at Stormont on Thursday.

However the Deputy First Minister, Michelle O’Neill of Sinn Féin, said she “very much welcome[d] the fact that the EU have taken the decision today to legally challenge the British government.

“They are in breach of international law, they have legislated to breach international law, so I think that it’s right that the EU should take this approach and we very much look to them to defend the Good Friday [Belfast] Agreement and the protections that were afforded to the people here in terms of the [Northern Ireland] protocol,” she said.