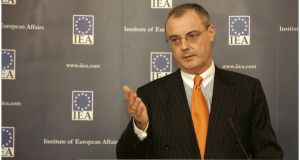 David O’Sullivan’s last official posting was as EU ambassador to the US from 2014-2019. File photograph: Dara Mac Dónaill

The EU and UK could agree a “device” to extend the transition period if talks fail to secure a trade deal by the July 1st deadline, a former European Commission secretary-general has said.

David O’Sullivan, an Irish former EU director-general in charge of trade who brokered the bloc’s trade with South Korea, said the UK government could drop its objection to the extension of the transition period from the end of the year if it could be sold politically at home.

This could then “buy” both sides “more time to continue the discussions” to resolve issues where agreement has not agreed and avoid another potential “cliff-edge” no-deal scenario on December 31st, Mr O’Sullivan told The Irish Times.

British prime minister Boris Johnson has threatened to walk away from Brexit trade talks if negotiations have failed to make progress by June and to focus instead on preparations for the UK’s hard exit from EU economic rules on World Trade Organization terms at the end of the year.

Under the Brexit withdrawal agreement, both the EU and UK must agree to extend the transition period by July 1st, though the UK government has legislated to prevent this scenario happening.

Mr O’Sullivan said that he did not think it possible to agree a comprehensive free trade agreement in the nine-month period available and said that an extension of the transition period could be agreed, “which would not be called an extension”.

“As a former negotiator I could imagine such a device being possible if both sides felt it worked for them,” he said.

“Obviously it would require the UK to feel they could sell this as not being an extension of the transition phase, but I could imagine that it would have benefits for both sides potentially if it is not possible to solve everything or even to solve most things by the end of the year.”

The retired Irish civil servant said he was most worried the EU-UK trade talks, which began on Monday, were not starting from “a position of mutual trust and confidence” in the wake of reports saying that the UK were trying to “get around” the ratified Brexit deal on Northern Ireland.

“It is very unhelpful. As Irish people, of course we feel particularly aggrieved by that kind of language,” he said.

“Stepping back from the emotions of our nationality, I think the rest of the EU will look at this and say, ‘but wait a minute we have a legal document, legally binding by both sides, ratified and suddenly we are told one side is actively considering how to wriggle out of it.’”

Mr O’Sullivan, whose last official posting was as EU ambassador to the US from 2014-2019, described the EU-UK trade talks as “unprecedented” in that the two sides were moving from a position of total free trade to less free trade.

The negotiations were “sort of free trade in reverse” as the discussions were uniquely aimed at finding agreement on the degree of divergence rather than convergence, said Mr O’Sullivan.

“Here we have perfect convergence which we are trying to turn into imperfect divergence.”

Mr O’Sullivan will be speaking at an event hosted by the Institute of International and European Affairs in Dublin and Trinity College’s “Hist” debating society on Wednesday alongside former commission president Romano Prodi, and former European Council president and Belgian prime minister Herman Van Rompuy.