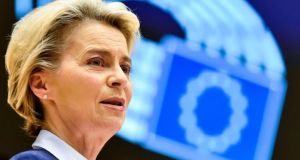 The European Union and United Kingdom are racing to finish a deal on trade before breaking for Christmas, with the two sides moving closer on the outstanding issue of fish.

An EU official indicated a deal was imminent. “We are in the end phase now,” the official said.

It is “possible but far from certain” that a post-Brexit trade deal could be agreed with Brussels on Wednesday, a Downing Street source has said. A UK cabinet minister has also indicated that hopes are rising for securing an agreement although major differences still remain between the UK and the EU.

Commission President Ursula von der Leyen has remained in headquarters in the Berlaymont to try to bring the agreement over the line by Christmas Eve, tic-tacking in phone calls between British prime minister Boris Johnson and EU member states.

Taoiseach Micheál Martin told RTÉ’s Today with Claire Byrne that fish was the final hurdle in the negotiations, and that if a deal was reached today or tomorrow officials would be working on the text on Christmas Day.

“We’re all on standby,” Mr Martin said. “On balance, given the progress that has been made, there should be a deal, and no-deal would be an appalling shock to the economic system.”

The EU has offered to cede 25 per cent of the roughly €650 million worth of fish stocks its boats catch in British waters, an increase of a previous bid position that 18 per cent was the maximum that could be considered.

But British negotiators have countered with a demand for 35 per cent, with pelagic fish being treated separately, which would raise fears that Irish fleets that catch mackerel and herring could be disproportionately at risk of losing out.

Officials warn that such percentages are fluid, and intense talks are continuing to try to eke out a landing ground that would allow the negotiators to return home for Christmas Day.

The fact that the two sides are still locked in negotiations just hours before the Commission buildings should in theory be shut down and locked for the holiday is seen as a sign that both sides believe a deal may be close.

“They are still talking so things are moving,” an EU diplomat said.

The legal drafting and scrutiny of any deal by member states would also take time and is an additional pressure on the talks.

All hopes of ratifying the deal through the European Parliament have now been abandoned as not enough time remains, meaning that member states would have to agree to ‘provisionally’ apply the terms from January 1st to avoid having to impose tariffs on trade. The parliament could vote at the end of the month to give its stamp of approval to the deal.

A deal would avoid the worst damage of a shift to default World Trade Organisation terms, but would still mean barriers to trade between the UK and EU that did not exist before.

Minister for Foreign Affairs Simon Coveney has warned businesses to expect “some weeks” of disruption to trade passing through Britain and has urged hauliers to opt for direct ferry routes to the continent instead, as the end of the transition period coincides with disruption due to Covid-19.