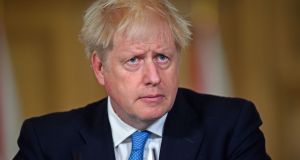 British and EU negotiators have agreed to talk next week despite Boris Johnson’s warning that Britain must prepare to leave the post-Brexit transition period without a deal.

The British prime minister said on Friday there must be a “fundamental change” in the EU’s approach to the negotiations if a no-deal outcome is to be avoided.

“After 45 years of membership they are not willing, unless there is some fundamental change of approach, to offer this country the same terms as Canada. And so, with high hearts and complete confidence, we will prepare to embrace the alternative,” he said.

Downing Street said the EU had ended the trade negotiations by failing to agree to move into a more intensive phase of negotiations and for suggesting at this week’s European Council in Brussels that Britain must move from its positions to make a deal possible.

In a call on Friday evening, Britain’s chief negotiator, David Frost, rejected an offer by his EU counterpart to resume talks in London next Monday, but the two men agreed to speak next week.

“Lord Frost said that, as the prime minister had made clear, the European Council’s conclusions yesterday had left us without a basis to continue the trade talks without a fundamental change in the EU’s approach to these negotiations. There was, accordingly, no basis for negotiations in London as of Monday. He and Michel Barnier agreed to talk again early next week,” a Downing Street spokesman said.

Mr Johnson last month set October 15th as a deadline for progress in the negotiations, threatening to walk away from the talks if a deal was not within reach.

EU leaders played down the significance of the latest British move, stressing they wanted negotiations to continue and that an agreement was in the interest of both sides.

The two sides have moved closer in recent weeks on the most important outstanding issues: fisheries, level playing field guarantees of fair competition and how disputes over the agreement’s implementation should be resolved.

Britain has been pressing the EU to intensify the talks and to start negotiating the legal text of an agreement. but Brussels insists that the “landing zone” for a deal must be clear before moving into that phase.

Scotland’s first minister Nicola Sturgeon condemned what she described as Mr Johnson’s reckless approach to the negotiations while Britain is struggling to deal with the impact of coronavirus.

“At best this is reckless brinkmanship. At worst it means the UK government is now actively pursuing a no-deal outcome,” she said.