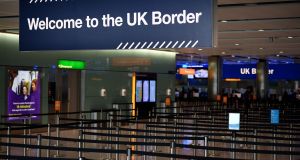 UK border signs are pictured at the passport control in Arrivals in Terminal 2 at Heathrow Airport in London. Photograph: Daniel Leal-Olivas/ AFP via Getty Images

Britain’s trade and co-operation agreement with the European Union has moved a step closer to ratification after EU ambassadors in Brussels approved it unanimously. By 1pm on Tuesday, the 27 member state governments will agree in writing to implement the deal provisionally from New Year’s Day, pending ratification by the European Parliament a few weeks later.

The leaders of the parliament’s political groups said on Monday that they would consult the European Commission and the member states about extending MEPs’ scrutiny of the agreement beyond the end of February. MPs and peers at Westminster will debate the agreement on Wednesday with votes in both houses the same day on legislation to give effect to it under British law.

A “star chamber” of lawyers charged by the European Research Group (ERG) of Conservative Brexiteers with scrutinising the deal will give its verdict before the start of Wednesday’s debate. But a number of Eurosceptic hardliners have already signalled their satisfaction with the deal’s protection of British sovereignty.

“This proposed agreement clearly rules out any future jurisidiction or control by the European Court of Justice over the UK,” former minister John Redwood said.

“As it is important to protect our sovereignty from any future attempted infringements by the EU acting under this agreement, it is also crucial that there is an easy exit clause. This was something I lobbied for strongly. Financial Provision 8 headed ‘Termination’ gives a simple clean exit.”

The provision states that either party may terminate the agreement at 12 months’ notice.

Boris Johnson spoke on Monday with European Council president Charles Michel, telling him he welcomed the deal as a new starting point for the relationship between Britain and the EU.

“We looked forward to the formal ratification of the agreement and to working together on shared priorities, such as tackling climate change,” the prime minister said.

In the hours after the agreement was reached on Christmas Eve, members of the British negotiating team briefed against EU chief negotiator Michel Barnier, whom they said had been sidelined by commission president Ursula von der Leyen.

In an interview with Le Figaro, Mr Barnier dismissed the claim, saying it had never been his role to negotiate with the British prime minister and that Dr Von der Leyen’s predecessor Jean-Claude Juncker had also played a more prominent role towards the end of talks on the withdrawal agreement.

He said the negotiations with Britain had persuaded politicians and voters in other European countries that leaving the EU was not a good idea, adding that the agreement would amplify that message.

“These negotiations have reinforced the conviction of leaders and citizens that it is better to be together rather than on one’s own,” he said.

“There are true differences between a member country and a third country. We will see it pretty soon.”

He said the agreement had strong measures to ensure that Britain, which threatened during the recent negotiations to renege on the withdrawal agreement, will play by the rules.

“From the experience we have had we built in safeguards that are necessary to make sure there is a strong incentive for both sides to stick to what they have agreed to,” he said.