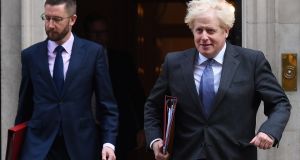 Downing Street has warned the House of Lords against attempting to block the UK Internal Market Bill, which would break international law by giving British ministers the power to override parts of the Brexit withdrawal agreement.

The Bill passed its first stage in the House of Commons on Monday night and the government expects MPs to approve it in its next stage next week before sending it to the House of Lords, where the ruling Conservatives do not have a majority.

British prime minister Boris Johnson’s spokesman said on Tuesday that the Bill was covered by the Salisbury Convention, which protects Bills fulfilling manifesto pledges from being blocked in the Lords.

“We would expect the Lords to abide by the Salisbury Convention. Guaranteeing the full economic benefit of leaving the EU to all parts of the United Kingdom and ensuring Northern Ireland’s businesses and producers enjoy unfettered access to the rest of the UK were clear Conservative manifesto commitments which this legislation delivers,” the spokesman said.

The Bill’s critics claim it contradicts the Conservative manifesto by undermining the Brexit deal all the party’s candidates promised to support and which the prime minister described as “oven-ready”.

Former Northern Ireland secretaries Julian Smith and Karen Bradley were among the Conservative MPs who abstained in Monday night’s vote on the Bill, joining senior backbenchers including the two most recent former attorneys general Geoffrey Cox and Jeremy Wright and former chancellor of the exchequer Sajid Javid in doing so.

Former Conservative leader and foreign secretary William Hague on Tuesday added his voice to the criticism of the legislation.

“In the event of no deal [on a future relationship] being reached with the EU, the UK will have particular need of upholding global rules. If some EU members make it difficult for our exports, we will no doubt call to our aid the rules of the World Trade Organisation. And if the fishing boats of other countries intrude into our waters, we will rely on the UN Convention on the Law of the Sea. All of this is international law, and to set the precedent of breaking it is a very bad idea indeed,” he wrote in the Daily Telegraph.

“Whenever I spoke as foreign secretary about the upholding of laws and treaties, to the UN or any errant state, I did so with the utter confidence that my country stood on solid ground. We undermine that ground at our peril.”

Northern Ireland Secretary Brandon Lewis, who told the House of Commons last week that the Bill would break international law “in a very specific and limited way”, will appear before the Northern Ireland Affairs Committee on Wednesday. Richard Keen, advocate general for Scotland, told the House of Lords on Tuesday that Mr Lewis had “answered the wrong question” when he made the comments last week and that the Bill was lawful.

“In my opinion the present Bill does not in itself constitute a breach of international law or of the rule of law.”