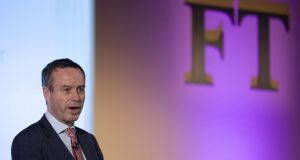 Three months before the 2016 Brexit referendum, Dominic Cummings and two other Vote Leave operatives visited the Financial Times for lunch with its then editor, Lionel Barber. As Barber recalls in his newly published The Powerful and The Damned: Private Diaries in Turbulent Times, he challenged Cummings about his campaign’s claim that Brexit would save £350 million a week, pointing out that it would be a drop in the ocean compared with the economic shock it would cost.

Cummings said the cost of an economic shock was unknowable and the ordinary person in the street would have little understanding anyway.

“The enormity of the faux pas sinks in. Cummings, momentarily flummoxed, says: ‘This conversation is off the record, right?’

“I could throw him overboard but offer a lifeline of sorts. ‘That’s OK, Dominic, we have lots of people come to the FT and show contempt for ordinary people’,” Barber writes.

When I spoke to Barber this week about his diaries, Boris Johnson’s director of communications Lee Cain had resigned and Cummings was hours away from following suit. Barber believes the drama in Downing Street is a struggle about the direction of Johnson’s government and a consequence of the prime minister’s excessive reliance on campaigners such as Cummings and Cain.

Barber was the an FT correspondent in Brussels in the 1990s at the same time as Johnson and he has observed him closely ever since.

“You’re born with your character and the nature of the way you’re constructed, and Boris Johnson has always been undisciplined both in his private and public life,” he says. “He’s a joker, he’s a performer. He’s not by any stretch of the imagination a natural leader beyond somebody who can kind of perform. That’s completely different from building a team and having a strategic sense of direction.

“We know that he wrote two versions of whether we should leave or remain before the Brexit campaign. And this latest episode over the chief of staff shows weakness. I think real leaders, tough leaders, can say no to people and also are good at building a team. And he hasn’t really shown those qualities. And so he’s a faux Churchill, he’s a biographer of Churchill but he’s no Churchill.”

Barber’s diaries are full of encounters with the rich and powerful, many of whom he interviewed after he became editor, some of whom he got to know during his time as the FT’s correspondent in Brussels and Washington. One or two, including former European Central Bank president Mario Draghi, are friends.

But while Barber clearly relishes proximity to power, he is adamant that none of these close encounters made him any less willing to publish stories damaging to the figures he met.

“It really doesn’t work like that with me as an editor. Access obviously is double-edged. But when you go to see these people, you have your eyes wide open and you know they’re not your friends. You can’t have friends if you’re an editor,” he says.

“It’s just you have such an important position of responsibility, and I think if you asked any of the FT journalists, they know that. The access was to get stories.”

Barber, whose father, Frank, was a newspaper subeditor, went to work in regional newspapers as soon as he left the University of Oxford and he worked at the Scotsman and the Sunday Times before joining the FT in the 1980s.

In his 15 years as editor, Barber transformed the FT from a failing newspaper focused on the British business market into a successful, hugely influential global news organisation. He oversaw a technological shift that after 10 years saw digital subscriptions overtake print advertising in terms of revenue.

But among his first objectives on becoming editor was restoring what he calls the “gold standard” of the paper’s journalism.

“Accuracy, authority, trustworthiness – that what you read you could believe was the best shot at the truth,” he says. “Showing that facts matter. At the beginning it was all about that – let’s just go back and make sure that we’re focused on the essential disciplines of good journalism and then we’ll do great journalism. Authority meant finding the best minds and the best writers.”

“I was 50. I didn’t expect the job. I got given the job and I was determined to succeed. If I failed, I’d leave or I’d be fired. But I had a vision. And one of the things that was so important was to say, we’re not Britain’s business newspaper, which was our rubbishy slogan in 2004. We’re a global newspaper; we’ve got 100 foreign correspondents.”

Barber’s editorship began with the settlement of a libel action over an investigation published before he started but it ended with the FT exposing one of the biggest financial frauds Europe has seen. Dan McCrum, one of the paper’s investigative journalists, spent three years digging into Wirecard, a digital payments company based in Munich that had become the darling of Germany’s fintech sector.

“Wirecard was the toughest story I’ve done,” Barber says. “I never experienced anything like it as an editor or a reporter. They threw everything at us. We said in January 2019 that they were committing fraud. We identified the person responsible – he’s now on the run. They never sued us for libel but they basically got the authorities on side, the regulators, to launch a criminal complaint against us for supposedly colluding with short sellers. They had loads of PR companies. We were under surveillance from ex-intelligence officers and we had lawyers threatening us every other day.”

When new auditors finally investigated the company, which was once worth more than Deutsche Bank, they discovered that €2 billion was missing. Wirecard filed for insolvency in June.

In his book Barber calls for a reform of capitalism with a shift away from the system of shareholder value towards one that takes greater account of other stakeholders and of issues such as climate change.

“I believe in the profit motive and I think capitalism is a force for good. But it needs to adapt. It needs, to quote Macaulay, to reform in order to preserve. It’s very clear that climate change is an issue. You need to be looking at how your business is constructed. You can’t be just polluting the planet,” he says.

“It’s not just about giving the money to the shareholders and paying the board as much as possible. I think some of the sky-high salaries and rewards for failure have been a great disservice to capitalism. It needs to adapt and to do some reforms, but the model is not bust.”