Planet Business: What a way to make a living 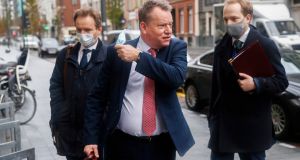 Image of the week: Frosty the Brexit man

Britain’s chief Brexit negotiator David Frost – known in Downing Street as “Frosty” – had a busy week in Brussels where he resumed talks with European Union counterpart Michel Barnier on Monday. Before Covid-19 derailed the process, it was the UK’s stance that “British fishing grounds are first and foremost for British boats” that was proving a major stumbling block, with the EU seeking a “fair deal” on fisheries as a condition of a trade agreement. Still, the negotiating teams can now see “the landing zones” on a deal, it fell to Taoiseach Micheál Martin to say. Boris Johnson, once again in self-isolation, this time after contact with a Covid-positive Conservative MP, seemed more interested in bad-mouthing a devolved Scotland, dismissing allegations of “coronyism” in government contracts for personal protective equipment (PPE) and rolling out his “Captain Hindsight” nickname for Labour leader Keir Starmer. Meanwhile, Kent continues to be terraformed into a giant lorry park.

Song written and performed by country music superstar Dolly Parton and first released 40 years ago. It went on to top the Billboard Hot 100 (a US number one) in January 1981.

US biotech company Moderna announced on Monday that its Covid-19 vaccine protects almost this many people – 94.5 per cent to be precise. Pfizer, which originally said its vaccine was “over 90 per cent effective” based on interim results, has now also reported a 95 per cent protection rate.

Sum that Dolly Parton contributed to early research for the Moderna vaccine back in April. The star said she was “very honoured and proud” to have made the donation to the Vanderbilt University Medical Center in Nashville, one of the trial sites for the vaccine.

Getting to know: Lael Brainard

In one respect, economist Lael Brainard – tipped to become the next US treasury secretary – isn’t a typical pick for the job. She’s a woman, and the US has never had a female treasury secretary, much like this State has never had a female Minister for Finance and the UK has never had a female chancellor of the exchequer. In every other respect, Brainard’s CV checks familiar boxes, from the career-beginning stint at consulting firm McKinsey to her current role on the Federal Reserve’s board of governors. A diplomat’s daughter, Brainard grew up in what was then West Germany and later Poland which, combined with her time served overseeing international affairs at the treasury department during the Obama administration, has seen her dubbed an internationalist. She is also more dove than hawk on monetary policy, thinks diversity is important in economics and is about 100 per cent less likely than incumbent treasury secretary Steve Mnuchin to have any kind of pop at climate activist Greta Thunberg.

Facebook chief executive Mark Zuckerberg and Twitter boss Jack Dorsey were the double-headed attraction at this week’s US senate judiciary committee hearing, yielding yet more study material for any actors fated to portray Zuck or @Jack on screen. So what were the highlights?

1 Trump treatment. Dorsey confirmed that Twitter’s policy of allowing Donald Trump to regularly violate its rules, albeit with the recent addition of clarifying “labels”, will not continue when he is no longer US president. Hurrah.

2 “Robber barons.” Democratic senator Richard Blumenthal wasn’t holding back. “You have built terrifying tools of persuasion and manipulation – with power far exceeding the robber barons of the last Gilded Age.”

3 Banning Bannon. Blumenthal also asked Facebook to rethink its decision not to ban Steve Bannon, the former Trump adviser last seen calling for the beheadings of Dr Anthony Fauci and FBI director Christopher Wray. “That’s not what our policies would suggest we should do,” replied Zuckerberg with trademark charisma.

4 “Ultimate editor.” It sounds like the name for a really bad computer game, but this was what Republican Lindsey Graham said Facebook and Twitter were, given they limited the spread of a New York Post article that made allegations about Hunter Biden, son of the now president-elect. Dorsey conceded that it had been wrong to intervene.

5 Mission impossible. Dorsey, defending Twitter’s mixed record on curbing hate speech, summed up the awkward social media conundrum: “We are facing something that feels impossible. We are required to help increase the health of the public conversation, while at the same time ensuring that as many people as possible can participate.”