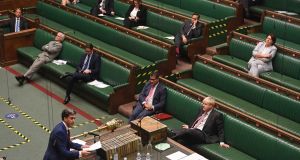 The finance ministers of Northern Ireland, Scotland and Wales have warned of “collective concerns” over the impact of the UK’s Internal Market Bill on funding for the devolved administrations.

They said the bill allows the UK government to undertake spending in devolved areas – including for replacement EU funding – without any engagement with the devolved nations, and could have an impact on future consequential funding arrangements.

The controversial bill, which was approved by a majority of MPs in the Commons earlier this week, gives the UK government the power to change part of the Brexit withdrawal agreement – a move which the North’s Secretary of State, Brandon Lewis, said last week he expected would “break international law”.

“This is greatly concerning and could have huge implications for the Good Friday Agreement,” he said.

“The British Government should not interfere in funding matters which are currently the responsibility of the devolved administrations.”

However the Secretary of State for Scotland, Alister Jack, who was challenged on the issue when he appeared before MPs on the Scottish Affairs Committee on Thursday, said the UK government would press ahead with the legislation even if the devolved governments withheld their legislative consent.

Since devolution the UK government has followed a convention, sometimes known as the Sewel Convention, that it will not normally legislate with regard to devolved matters without the consent of the devolved parliaments.

“We are legislating because under the Sewel Convention there is this convention of not normal,” Mr Jack said, adding that “this idea that this is wrecking devolution is fanciful.”

He said the legislation was required because the UK was leaving the EU, which was something which had been envisaged when devolution was established.

“So we now need to pass bills to secure the United Kingdom economy and secure the internal market... that is the right thing to do.”

The Welsh finance minister, Rebecca Evans, said she was “deeply concerned that the bill gives UK ministers, for the first time since devolution, powers to fund activity in areas which are clearly devolved to Wales.

“In Wales funding decisions are taken in partnership with local communities, to ensure that they reflect the needs of the people in Wales.

“The powers set out in the bill completely undermine devolution and will see decisions currently taken in Wales clawed back by the UK Government.”

Scotland’s finance secretary, Kate Forbes, said it was “entirely unacceptable that – with no prior notice — the UK government has written provisions into the Bill that presume Whitehall control over the delivery of replacements for the EU funding programme in Scotland; a programme that Scottish ministers have delivered successfully for decades.”

She said the Bill would also allow the UK government to “dictate how money is spent in devolved areas without the consent of Scottish ministers.

“It puts at risk funding for a whole host of capital programmes – schools, hospitals and infrastructure. It reverses the devolution process and we will oppose any attempt to bypass the Scottish parliament and government, which are elected by the people of Scotland,” she said.