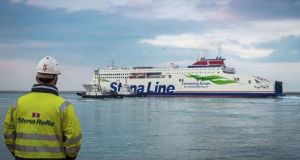 Stena Line brought forward the planned doubling of ferry sailings and capacity on its ships on the direct service between Rosslare and Cherbourg in response to congestion.

The first direct sailing to mainland Europe operated by shipping company Stena Line after Brexit comes into effect is fully booked, the company has said.

The Stena Horizon ferry on Saturday will carry more than 50 driver-accompanied lorries along with between 40 and 50 unaccompanied trailers on the sailing from Rosslare to Cherbourg.

Demand for space on the first two ferries operated by Danish shipping firm DFDS on the new direct service to mainland Europe between Rosslare and Dunkirk, both of which are leaving from the Co Wexford port on Saturday, is reported to be over-subscribed.

Transport and export companies are booking on to direct ferries to continental Europe to avoid post-Brexit controls at EU-UK border crossings after Brexit takes effect on Thursday night.

The direct ferries have become more popular for logistics firms looking to avoid potential delays at British ports in the wake of the long traffic delays at ports in southern England caused by France’s ban on road freight from the UK before Christmas.

Stena Line brought forward the planned doubling of ferry sailings and capacity on its ships on the direct service between Rosslare and Cherbourg in response to the congestion.

Hauliers have said there is insufficient capacity for roll-on, roll-off lorry freight on direct routes to mainland Europe to take at least 150,000 lorries that cross the so-called landbridge every year through Britain to mainland Europe that has been the fastest and cheapest route to date.

Minister for Foreign Affairs Simon Coveney last week urged businesses to book on to direct ferries to and from mainland Europe “for the foreseeable future” for the “certainty” of avoiding traffic logjams at British ports as a result of the post-Brexit border checks and inspections.