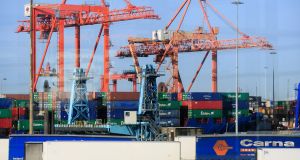 Despite the deal allowing for zero tariffs on goods traded between the UK and EU, Irish businesses are encountering delays and problems in trade with Britain. Photograph: Gareth Chaney/Collins

Britain’s economy will shrink over the longer term as the EU-UK Brexit trade deal “lacks substance” in vital areas, credit analysts warn in a report released on Monday.

Their assessment comes as Irish businesses on both sides of the Border continue to wrestle with difficulties caused by the UK’s exit from the world’s biggest trade bloc this month.

Credit ratings agency Moody’s, which assesses organisations’ and states’ abilities to pay their debts, says a trade deal struck between Brussels and London on Christmas Eve is skewed in the EU’s favour.

Benedicte Andries, Moody’s analyst and co-writer of the report, says “while the Brexit agreement avoids a no-deal scenario, it largely lacks substance in areas vital to the UK economy, such as services”.

As a result, he says the UK economy will be significantly smaller over the longer term.

Despite the deal allowing for zero tariffs on goods traded between the UK and EU, including the Republic and Northern Ireland, Irish businesses are encountering delays and problems in trade with Britain.

British suppliers have in some cases ceased deliveries to the North, which remains in the UK but which has a customs border with Britain.

The report, written by Mr Andries and Colin Ellis, Moody’s managing director of credit strategy, notes that there is still uncertainty for shops in the North supplied from Britain.

Big retail chains, including Tesco and Marks & Spencer, which both have big businesses in the Republic also, have questioned the workability of new certification requirements that will come into force after a “grace period” ends on March 31st.

They have written to the British government seeking aid in minimising tariffs. “However, this would be subject to a decision in the Joint Committee of the Withdrawal Agreement, which oversees the Northern Ireland Protocol,” the report points out.

More broadly, Mr Andries and Mr Ellis state that the agreement leaves the UK facing significant non-tariff barriers in trade with the EU, which includes the Republic.

They say it includes relatively few measures to reduce the need for customs checks and control or to eliminate the need for dual certifications.

While goods originating the in the EU or UK are not subject to tariffs when they are exported to either jurisdiction, they must be accompanied by customs and security declarations, as well as pre-boarding notifications, when they are shipped.

Moody’s also argues that the agreement does not tackle all of the uncertainties that have hampered investment in the UK since the June 2016 Brexit vote.

The agency says that it has already incorporated the likely impact of the deal into its ratings for sovereign and domestic UK borrowers.

Trade with Britain will not return to pre-Brexit model, exporters warned

Grafton Group expansion beyond Ireland, UK and Netherlands on hold amid Covid-19