Coveney: Johnson wants a deal but he has a strange way of going about it 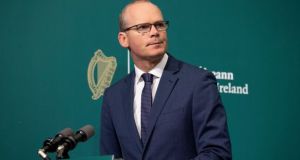 Simon Coveney: It’s an extraordinary approach to take in a negotiation with a partner you’re looking to build a future relationship with.

Minister for Foreign Affairs Simon Coveney has said he still believes the UK’s latest approach to Brexit is a negotiating tactic and that British prime minister Boris Johnson still wants a deal, but “has a strange way of going about it.”

Speaking on Newstalk’s Pat Kenny show, he said that the British government was trying to create a lot of tension as negotiations with the EU reached a critical point.

Mr Johnson faces a Conservative backbench rebellion on Monday when MPs debate a Bill his government admits will break international law by overriding parts of the Brexit withdrawal agreement.

A number of senior Conservatives, including chairs of parliamentary committees, have said they will not support the Bill and some are backing an amendment that would require a new parliamentary vote before the measures breaching the withdrawal agreement come into effect.

Mr Coveney said that “the hawks” within Number 10 Downing Street had managed to convince the prime minister to take a much more aggressive approach to the negotiations, effectively saying “give us what we want in these negotiations” some of which was not consistent with international law.

“It’s an extraordinary approach to take in a negotiation with a partner you’re looking to build a future relationship with. I think the British prime minister does want a deal, but he has a strange way of going about it.”

Mr Coveney added that even if the US Democratic presidential candidate Joe Biden does not win the forthcoming election, he did not think any trade deal would pass through Congress.

“Whether it’s president Trump or president Biden after the elections in November, in my view there will not be a trade deal passed in Washington between the US and UK if the Good Friday Agreement is undermined by this British government.”