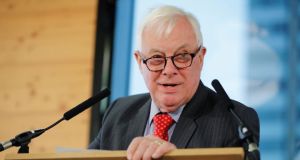 Chris Patten delivered a lecture in Dublin in honour of the late businessman and statesman Peter Sutherland. File photograph: Tolga Akmen/AFP via Getty

Former British Conservative Party chairman Chris Patten says he is “amazed” that the UK government regards a “level playing field” with the EU as “an impossible idea”.

Speaking after delivering a lecture in Dublin on the risks to liberal democracy, the UK’s former EU commissioner, who opposed Brexit, said the UK insisting on environmental standards in food production amounted to a level playing field.

“When we say in Britain that we don’t want chlorinated chickens, that is because we want level playing field with the US for production of chickens,” he told an audience.

Mr Patten said that to renew international cooperation in trade countries had to commit themselves to “an extension of level playing fields”.

The EU and UK are on a collision course in the upcoming trade talks with Brussels insisting that London agree to a level playing field to ensure the UK will not undercut the EU on standards.

Downing Street rejected the EU’s call on Tuesday for a level playing field, saying that Brussels was making unreasonable demands on Britain that it had not made of other trading partners.

Mr Patten was asked after his lecture whether he would have concerns about liberal democracy if Sinn Féin were to form part of a government given its past relationship with the IRA.

He said he did not think anyone “should hold history against people” but that people should make sure you know what the history was and make “pretty clear minded judgments about why, from time to time, you can put history on one side - not always - but from time to time”.

Mr Patten chaired the body more than 20 years ago that transformed the Royal Ulster Constabulary into the Police Service of Northern Ireland.

“It is possible to excuse people for what their antecedents might have been and to excuse people for the role that some of them may have played in history but I think it is very important to know what the history was and if you make that decision, to make it cooly and rationally,” he said.

In his lecture on the threats to liberal democracy around the globe, the UK’s one-time EU commissioner warned about attacks on democratic institutions and civil society including opposition groups, journalists and universities from the rise of populist leaders around the world.

Mr Patten, now chancellor of Oxford University, was speaking on “The Future of Liberal Democracy” at St Ann’s Church on Dawson Street in Dublin city centre in a lecture organised by Studies, the quarterly journal published by the Jesuits.

The lecture was delivered in honour of the late businessman and statesman Peter Sutherland whom Mr Patten praised for leading the negotiations that concluded the biggest trade agreement in history in 1993 when he chaired the body that later became the World Trade Organisation.

“There has been nothing like it since to change so many lives economically mostly for the better; nor does there appear much likelihood of anything like it happening again any time soon,” he said.