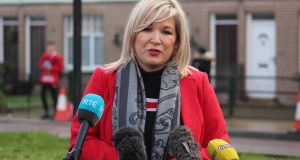 The choice between “Brexit Britain and a new Ireland” has never been starker, the Sinn Féin Deputy First Minister Michelle O’Neill has stated in marking the centenary of the Government of Ireland Act.

The December 23rd, 1920 Act created the legal conditions for the partition of Ireland.

“The socio-economic, political and cultural consequences of the forced partition of Ireland, as a result of the Government of Ireland Act, continue to reverberate to this day. Partition has failed all the people of this island,” said Ms O’Neill.

“Discrimination and state repression were the lived experience of nationalists and republicans in the northern state for successive generations,” she added.

“The Good Friday Agreement of 1998 revoked the Government of Ireland Act and has provided a peaceful democratic pathway to Irish unity,” she said.

Ms O’Neill predicted that a united Ireland would happen “during this decade of opportunity, where the freedom to choose our own future will be decided by the people on this island alone”.

“It is time to begin a planned transition to Irish reunification, and national reconciliation must be at the heart of this transformational process,” she said.

“A new national dialogue has already begun about future constitutional change. The Irish Government should accept its responsibility to facilitate that discourse.”

Added Ms O’Neill, “The choice between a narrow, inward-looking vision of Brexit Britain or the open inclusive vision of a New Ireland has never been more stark.

“It is time to work towards a new future beyond partition, to the creation of a new Ireland built on equality, reconciliation and respect for all.”