Buckle in for a gruelling Brexit summer 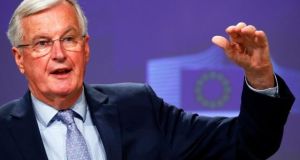 It has become a ritual that EU chief negotiator Michel Barnier emerges at the end to address media huffing and puffing and brandishing documents. Photograph: Francois Lenoir/EPA

British and European Union negotiators emerged from talks on post-Brexit relations this week agreeing on only one thing: this round of talks was largely a write-off.

It has become a ritual that EU chief negotiator Michel Barnier emerges at the end to address media huffing and puffing and brandishing documents, as he accuses the British side of intransigence and failing to understand the consequences of Brexit.

This time, his British counterpart David Frost rushed to seize the initiative by firing out a statement as Barnier was still on his way to the podium.

“I regret . . . that we made very little progress towards agreement on the most significant outstanding issues between us,” Frost announced, in language that closely echoed Barnier’s familiar routine. “We very much need a change in EU approach for the next round.”

The two sides are furthest apart on the so-called “Level Playing Field”. This refers to the EU’s wish that London should not be able to grant British companies a competitive advantages over EU rivals, by slashing environmental and labour standards, or granting helpful tax deals or state aid.

The EU will only give British industry unfettered access to sell into the single market with a guarantee it will be on comparable terms to homegrown companies. In other words: a level playing field.

The British response to this is simple: it is simply not going to fly with cabinet ministers. The point of Brexit was to throw off such red tape. Any standards followed by industry will be for Britain, alone, to decide.

The British negotiators outline their position in a manner laconic and patronising. The EU tells them to get real in a tone of wearied disbelief. Neither side moves an inch.

But one thing has changed. The British no longer say that, if they feel insufficient progress has been made by June, they will gather up their papers and walk out. Or in the new, socially-distanced version of negotiations, that they will pull the plug on the Zoom call.

Neither side believes there will be an extension. Instead, there are increased expectations of deepening talks that come to a head in the autumn.

Buckle in for a gruelling summer.