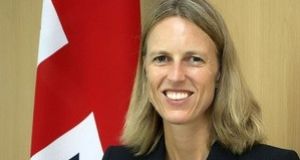 Alexandra Hall Hall: “I have been increasingly dismayed by the way in which our political leaders have tried to deliver Brexit.” Photograph: GOV.UK/Crown Copyright/PA Wire

A senior British diplomat in Washington has quit her post, saying she is no longer prepared to “peddle half-truths” about Brexit on behalf of a government she does not trust.

Alexandra Hall Hall, the lead envoy for Brexit at the British embassy, accused ministers of using “misleading or disingenuous” arguments about the implications of leaving the EU.

In her resignation letter, obtained by the US broadcaster CNN, Ms Hall Hall said her position had become “unbearable personally and untenable professionally”.

“I am also at a stage in life where I would prefer to do something more rewarding with my time, than peddle half-truths on behalf of a government I do not trust,” she wrote.

The timing of her departure, less than a week before the British general election, could hardly be more embarrassing for the Tories.

A UK Foreign Office spokesman said: “We won’t comment on the detail of an individual’s resignation.”

Ms Hall Hall, a 33-year veteran of the diplomatic service and former ambassador to Georgia, said the actions of ministers at home were making it harder for British diplomats to uphold “core values” abroad.

“I have been increasingly dismayed by the way in which our political leaders have tried to deliver Brexit, with reluctance to address honestly, even with our own citizens, the challenges and trade-offs which Brexit involves; the use of misleading or disingenuous arguments about the implications of the various options before us; and some behaviour towards our institutions, which, were it happening in another country, we would almost certainly as diplomats have received instructions to register our concern,” she said.

“It makes our job to promote democracy and the rule of law that much harder, if we are not seen to be upholding these core values at home.”

Her letter, addressed to deputy ambassador Michael Tatham and dated December 3rd, was said to have been shared widely with colleagues in the diplomatic service.

In it she insisted her decision to quit had nothing to do with being “for or against Brexit, per se”, and that she had been committed to making a success of her posting.

“I took this position with a sincere commitment, indeed passion, to do my part, to the very best of my abilities, to help achieve a successful outcome on Brexit,” she wrote.

She went on however: “Each person has to find their own level of comfort with this situation. Since I have no other element to my job except Brexit, I find my position has become unbearable personally, and untenable professionally.”

“They are failing to come clean on the fact that it is going to be nigh-on impossible to negotiate a new trade relationship by December 2020, meaning that the threat of a no-deal Brexit remains very much on the table,” he said. – PA