Britain to try to clinch post-Brexit deal over video conference

Specialised committee on Ireland and Northern Ireland due to meet soon 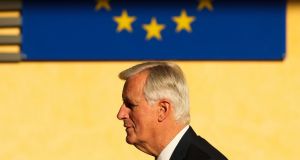 British and European Union negotiators plan to hash out a post-Brexit trade deal by video conference in rounds of talks starting next week, the two teams announced on Wednesday.

Lead negotiators Michel Barnier and David Frost held their first official meeting over video on Wednesday after talks were delayed due to the coronavirus pandemic. Mr Barnier tested positive for the virus in March, and both negotiators were put into isolation.

The negotiators exchanged legal texts and agreed on the next steps in a meeting described in a joint statement as “constructive”. They announced three rounds of talks would be held remotely, starting on Monday next week, followed by further rounds in May and June. Each round will be a week long.

“The two sides agreed on the need to organise further negotiating rounds in order to make real, tangible progress in the negotiations by June,” the statement read. A high-level meeting will be held that month to take stock of what progress has been made.

Until then, Britain will continue to trade with the EU on the same terms as before. If no deal is agreed and the transition period ends as scheduled at the end of the year, Britain will automatically begin trading with EU states on World Trade Organisation rules, a change that is estimated to hit the Irish economy hard.

Under the withdrawal agreement reached last year, Northern Ireland is to remain in line with the EU. But this entails checks between Britain and Northern Ireland. The EU has said reaching a future relationship deal is contingent on evidence that the agreement already made is being implemented. A joint committee examining this implementation met at the end of March.

The negotiators “agreed that the proper and timely implementation of the withdrawal agreement was a key priority for both sides”, the joint statement read, adding that a specialised committee on Ireland and Northern Ireland would meet soon.

Before the pandemic hit, negotiators had been scheduled to meet five times by May in rounds of talks that were supposed to alternate between Brussels and London, but were only able to meet in person for the first round. Even before the pandemic threw talks off course, agreeing a deal on time had already been viewed as challenging due to the complexity of the trade relationship.