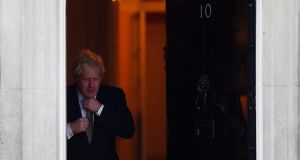 Just days ahead of Britain’s exit from the European Union, both sides claim to be well prepared for the forthcoming negotiations about their future relationship. Downing Street says Boris Johnson would happily start the talks the day after Brexit Day, if only the EU didn’t have to wait until February 24th to agree its negotiating mandate.

Whitehall sources recall that the EU complained that Theresa May’s government was never clear about what it wanted, adding that Johnson’s approach would present no such problems. Britain wants a Canada-style free trade deal, they say, citing the Conservative manifesto’s promise that the future arrangement should involve no “political alignment”.

The EU is unsure, however, what London means when it says it wants no alignment, and some in Brussels wonder if Downing Street itself knows.

We will get an idea of the EU’s approach to the negotiations in the days after Brexit Day, when the European Commission publishes its “negotiation directives”. These will be the commission’s proposals for the negotiating mandate that must be approved by the 27 member-state governments.

If Downing Street thinks the commission’s proposals represent an outlandish opening bid that will be substantially watered down by the member states, it is likely to be disappointed. Michel Barnier, who is leading the EU’s negotiating team, has been consulting the 27 governments to ensure that the commission’s proposals contain no surprises and the directives he publishes are likely to be close to the final negotiating mandate.

Johnson will outline Britain’s approach in a speech in early February, which could also sketch out what he hopes to achieve in a trade deal with the US.

Despite warnings from Brussels about the tight timetable for the negotiations, both sides agree that it is possible to agree a deal by the end of this year, although the EU insists that such an agreement will have to be very limited. This could involve a dramatic scaling down of ambition a few months into the negotiations, prioritising progress in those areas where a cliff-edge at the end of the Brexit transition period at the end of December would be most damaging.

Britain and the EU have a mutual interest in securing a free trade agreement covering goods and a security arrangement that allows them to continue to share information on criminal suspects and to extradite them with ease.

The EU believes it is making Britain a generous offer of zero-tariff, zero-quota access for goods to its market of 450 million people. What it demands in return is a commitment from Britain to maintain a “level playing field” on state aid, social and environmental standards and taxation.

Speaking in Davos on Thursday, chancellor of the exchequer Sajid Javid said Britain was leaving the single market and the customs union to gain control of its rules and laws.

“We will be a sovereign and independent country, not a rule-taker. But we’ll always protect the interests of British businesses throughout this process and we’ll maintain high standards – not because we are told to, but because we want to,” he said.

Javid’s remarks reflect a view in Downing Street that Britain can voluntarily maintain high standards but it cannot agree to anything that would mean automatically adopting new rules set in Brussels. This rules out “dynamic alignment” with EU rules but it does not necessarily exclude a commitment to “non-regression” by maintaining at least the same high standards when the transition period ends in December.

In May’s deal, which the EU regards as the starting point for negotiations, Britain agreed to dynamic alignment on state aid rules but only to non-regression on social and environmental standards. On taxation, Britain agreed to remain aligned with a number of directives.

In reality, Britain spends much less on state aid than other big European countries, so a major expansion in its support for businesses would probably be possible even if it agreed to non-regression with the EU. EU member states watched with alarm Johnson’s swift intervention to rescue the airline Flybe and they will want any free trade agreement to include a cast-iron commitment on limiting state aid.

Despite Johnson’s wish to de-dramatise the negotiations, they will inevitably hit turbulence, particularly on issues such as fish, which raise passions in a number of countries, including Britain. Any deal which is agreed within the few months available this year is certain to be a narrow one with major costs to Britain’s economy and to some member states. But neither side has yet adopted a position that makes a deal by December impossible.