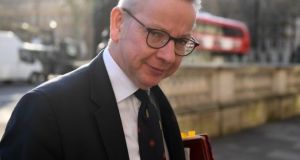 Michael Gove wrote to the SDLP, Sinn Féin, Alliance and the Greens saying that an EU office in Belfast was unnecessary. Photograph: Chris J Ratcliffe/Getty

The British government has been accused of being “petty”, “provocative” and “unhelpful” after it rejected a request for the European Union to have a permanent office in Belfast.

British cabinet office Minister Michael Gove responded to the North’s four pro-Remain parties – Sinn Féin, the SDLP, Alliance and the Greens – to say that an office was unnecessary.

Mr Gove said it would facilitate, where necessary, ad hoc visits by EU officials to Northern Ireland but it did not accept any permanent EU presence was required in Northern Ireland.

The four parties wrote to the British prime minister Boris Johnson last month urging that an EU office be re-established. The EU also made a request for an office in Belfast.

The previously permanent European Commission office closed at the end of January when the UK quit the EU.

There was an expectation at the time that some form of EU presence would be created later to assist continuing EU-UK business, but Mr Gove, responding on behalf of Mr Johnson, appears to have closed down that possibility.

The current stance of the British government appears in direct contrast to its position in February last year when it said it not only supported having an EU office in Belfast but in London, Edinburgh and Cardiff as well.

Just over a week ago Mr Gove told British MPs there was no need for a “mini embassy” in Belfast.

In the 2016 referendum, 56 per cent of the electorate in Northern Ireland voted to stay in the EU.

Notwithstanding the negative response, the Irish Government appears not to have given up hope that an office might yet be created. Previous figures from the European Commission office in Belfast show that going back to 1989 the EU supported the peace process, agriculture, fisheries, jobs and much more to the tune of more than €13 billion. It also plans to continue providing peace funding in the North.

“We would see no issue in terms of the Good Friday agreement in having an EU office in Northern Ireland, not least given ongoing EU support for the peace process,” said a Department of Foreign Affairs spokeswoman on Sunday.

“The Irish Government hopes this matter can be accommodated in a way that satisfies both sides’ needs and sensitivities,” she added.

“The ongoing opposition by the British government to a European Union office in the North is in bad faith,” he said.

“I think this is typical of the childish approach adopted by the British government during these [Brexit] negotiations,” he said.

“This gamesmanship from the UK government is reflective of their wider approach of not taking preparations for the implementation of the Ireland-Northern Ireland protocol seriously,” she said.

The DUP and Ulster Unionist Party, however, supported the British government’s position. In a brief statement, a DUP spokesman said, “We agree with UK government policy.”

“The idea of EU ‘perm reps’ with extra jurisdiction powers like the EU had in the Balkans is simply not acceptable in the UK – and it is inconceivable that any EU country would accept that on their sovereign territory,” he said.