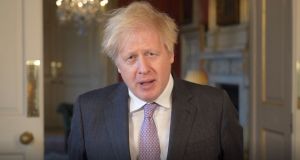 The first ferry crossings from Dover to Calais under Britain’s new trading terms with the European Union went smoothly on Friday as port authorities reported very light traffic in lorries.

UK government sources said many businesses had stockpiled goods in December to avoid possible disruption and predicted that the real test of the new arrangements would come next week.

Boris Johnson welcomed the end of the post-Brexit transition on New Year’s Eve as an opportunity for Britain to do things differently from its European neighbours.

“This is an amazing moment for this country,” he said. “We have our freedom in our hands and it is up to us to make the most of it. And I think it will be the overwhelming instinct of the people of this country to come together as one United Kingdom – England, Scotland, Wales and Northern Ireland working together to express our values around the world.”

Scotland’s first minister, Nicola Sturgeon, said her country found itself at the sharp end of Brexit, a choice a majority of Scots opposed and that she said was driven by values they did not share. Writing in The Irish Times, Ms Sturgeon said an independent Scotland within the EU would build a bridge to aid understanding between Europe and the UK.

“More and more people in Scotland believe our aspirations can best be met by continuing to contribute to the shared endeavour and solidarity that the EU represents,” she wrote. “Because of Brexit, we can now only do this as an independent member state in our own right. We have been inside the EU family of nations for nearly 50 years. We didn’t want to leave and we hope to join you again soon as an equal partner as we face the opportunities and challenges of the future together.”

In his New Year’s address from the Élysée Palace in Paris, French president Emmanuel Macron said Brexit was built on lies and praised the UK-EU trade and co-operation agreement as a deal that protected his country’s interests.

“A few days ago we reached an agreement to organise our future relations, defending our interests, our industries, our fishermen and our unity,” he said.

“The United Kingdom remains our neighbour but also our friend and ally. This choice of leaving Europe, this Brexit, was the child of European malaise and lots of lies and false promises.”

The trade and co-operation agreement does not cover Gibraltar, but in a last-minute deal announced on New Year’s Eve, Britain agreed that the territory should become part of the EU’s Schengen open borders area. UK foreign secretary Dominic Raab said further negotiations with the European Commission would lead to a treaty governing Gibraltar’s relationship with the EU.

“In the meantime, all sides are committed to mitigating the effects of the end of the transition period on Gibraltar, and in particular ensure border fluidity, which is clearly in the best interests of the people living on both sides,” he said.