Assembly hears of plans for customs posts at NI ports, setting the cat among the pigeons 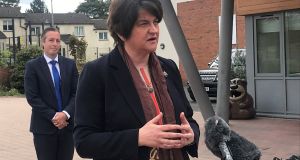 While coronavirus may have knocked Brexit off the front pages, it hasn’t gone away, and Sinn Féin junior Minister Declan Kearney set the cat among the pigeons again when he said there soon will be new physical trading posts set up at Northern Ireland ports.

He let this information out when taking a question from former Sinn Féin MEP Martina Anderson at a meeting of the Assembly’s Executive Office scrutiny committee on Wednesday.

He told committee members “without breaching executive confidentiality” that, following negotiations between the British government and the European Commission and also following a briefing of Arlene Foster and Michelle O’Neill’s Executive Office, London had “confirmed it will urgently put in place detailed plans with the executive, which does include the physical posts at ports of entry”.

This was to meet the protocol for January 1st next year, he said, while adding that the British government indicated it would provide the funding to put that infrastructure in place.

Ms Anderson seemed to have the information to hand that these new Border posts would be at Belfast, Warrenpoint and Larne. Her understanding also was that the posts would be required to facilitate extra customs officers, and extra vets checking trade in livestock.

It took a while for the pigeons to notice the cat, so to speak, but politicians took their concentration away from Covid-19 for a while to consider the implications of Mr Kearney’s information.

DUP member of the committee Christopher Stalford did detect what was afoot. At Wednesday’s committee meeting he countered that the UK was no longer in the EU and “therefore no longer obligated to live under their rules and their conditions”, and also that the EU was “no longer facing a prime minister without a majority and a parliament that’s hamstrung and unable to make any decisions”.

“We actually have a government which is capable of governing and capable of going ahead without the consent of the European Commission,” he added.

The British government sought to calm concerns by saying it had “always been clear that there will be requirements for live animals and agri-food, building on what already happens at ports like Larne and Belfast”.

But that didn’t work. First out of the blocks on Wednesday was Traditional Unionist Voice leader Jim Allister who said “no unionist could agree to the imposition of such posts”. He added that it also would have constitutional ramifications.

He was followed quickly by Ulster Unionist Party leader Steve Aiken who said that an “Irish Sea border was now a certainty” while lamenting, “It is unforgivable that we have ended up here.”

The nationalist and pro-Remain response was more of the “I told you so” variety. The SDLP South Belfast MP Claire Hanna said it was clear from the EU-UK Brexit deal “that unfortunately there would have to be checks somewhere”, and from her perspective it was better to have them in Belfast, Larne and Warrenpoint than on the North-South Border.

She took “no pleasure” from referring to the DUP previously keeping the Tories in government and now seeing, as Mr Aiken said, Boris Johnson acceding to an Irish Sea border, which is anathema to unionists.

And, conjuring an often-repeated line by the late Seamus Mallon, she said the moral of the story was, “If you can be bought, you can be sold.”