Brexit: UK trade deal with the EU passes in the House of Commons 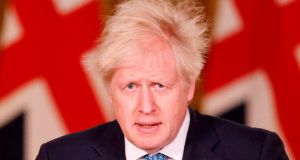 Britain’s prime minister Boris Johnson said the deal would allow the UK to ‘take sovereign control of our laws and our national destiny’. File photograph: Tolga Akmen/POOL/AFP via Getty Images

Boris Johnson’s EU trade deal has cleared the House of Commons, as the British government seeks to rush approval through parliament in a single day.

After little over four hours’ debate, MPs voted by 521 to 73 to give the European Union (Future Relationship) Bill, ratifying the deal finally agreed on Christmas Eve, a third reading.

The Bill now goes to the House of Lords, where the debate is expected to continue until around 10.30pm on Wednesday.

If, as expected, it passes the upper chamber, it will then go to Queen Elizabeth for royal assent, with an announcement expected around midnight.

That would pave the way for the deal to take effect at 11pm on Thursday when the current Brexit transition period, during which the UK has continued to follow EU rules, ends.

Opening the debate in the Commons, the prime minister said the deal would enable the UK to trade and co-operate with the EU on the “closest possible terms” while taking “sovereign control of our laws and our national destiny”.

He said he hoped it would end the “old, desiccated, tired, super-masticated arguments” which have dogged the country for years and enable it to move forwards to a “new and great future”.

“It embodies our vision shared with our European neighbours of a new relationship between Britain and the EU as sovereign equals joined by friendship, commerce, history, interests and values while respecting one another’s freedom of action,” he said.

“We are going to open a new chapter in our national story, striking free-trade deals around the world and reasserting global Britain as a liberal, outward-looking force for good.”

Labour backed the deal, despite misgivings from some pro-European MPs who said they would be abstaining or voting against.

However, party leader Sir Keir Starmer said that while the agreement is “thin” with “many flaws”, the alternative is to leave the EU single market and customs union with no agreement, pushing up prices and driving businesses to the wall.

“There’s only one choice today, which is to vote for implementing this deal or to vote for no-deal. Those that vote ‘no’ are voting for no-deal,” he said.

“This is the nub of it: those voting ‘no’ today want ‘yes’. They want others to save them from their own vote.

“Voting ‘no’, wanting ‘yes’, that’s the truth of the situation and that’s why my party has taken a different path.”

However, the Scottish National Party’s Westminster leader, Ian Blackford, condemned the deal as “an act of economic vandalism” and attacked Labour for failing to oppose it.

“I am sad to say that the official opposition has been missing in action. I can understand that this might be politically pragmatic for Labour but it definitely isn’t politically principled,” he said.– PA