Paymaster general says change of format sought ‘for both our sakes’ 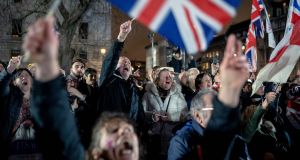 Britain wants to accelerate the pace of its negotiations with the European Union by changing the format of the talks, a cabinet office minister told MPs on Tuesday. Paymaster general Penny Mordaunt said any agreement must be in place before the end of the year so that businesses would have time to adapt to its terms.

“There is no point in our arriving at an agreement at the 11th hour: we have to arrive at an agreement to enable it to be implemented and ratified, but also in order for our citizens and businesses to prepare. That is what is dictating the timetable, and that is why we must have renewed focus. We are talking to the EU about having a change of format – about how we can increase the pace of negotiations, get the focus where we need it to be, and get a deal done for both our sakes,” she said.

Ms Mordaunt said the government would soon publish plans for preparing Britain’s border operations for changes after the end of the post-Brexit transition period. But she declined to give details and said officials were planning for all outcomes, including the possibility that no deal would be agreed.

“It would be prudent and wise for us to prepare for every scenario, just as we have always done. We did so last year and then did not need to implement those preparations. I am confident that we cannot only come to an agreement but do so in a timeframe that gives people the time that they need to prepare and to understand. We are very aware of the other things that are going on in the world that form the backdrop to that. Our approach is going to be achingly pragmatic,” she said.

“The government insisted that the Northern Ireland Assembly should have the final say on the protocol. The Assembly finally gave a say on Brexit when it voted last week to request an extension to the transition period to allow businesses, which are currently in the fight of their lives due to Covid, to adapt and to have the certainty that the minister refers to. If the Northern Ireland Assembly’s consent is so vital, should the government not listen to what it says?” she said.

Ms Mordaunt said that, although the Assembly would determine whether the terms of the protocol remain in force in a few years’ time, the government would not extend the transition.