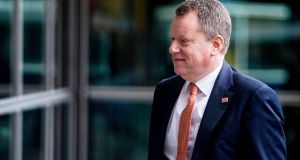 British Brexit negotiator David Frost: “Any such deal must of course accommodate the reality of the UK’s well-established position on the so-called ‘level playing field’, on fisheries, and the other difficult issues.” Photograph: Kenzo Tribouillard/AFP via Getty Images

Britain’s chief negotiator David Frost described progress in the Brexit talks as “limited”, adding that the two sides were close to the limits of what could be achieved without face-to-face talks.

Speaking after the latest round of talks ended on Friday, he said the talks must intensify and accelerate but appeared to abandon Britain’s threat to leave the talks if the shape of a deal was not in sight by the end of June.

“We need to conclude this negotiation in good time to enable people and businesses to have certainty about the trading terms that will follow the end of the transition period at the end of this year, and, if necessary, to allow ratification of any agreements reached,” he said.

“For our part we are willing to work hard to see whether at least the outline of a balanced agreement, covering all issues, can be reached soon. Any such deal must of course accommodate the reality of the UK’s well-established position on the so-called ‘level playing field’, on fisheries, and the other difficult issues.”

In its negotiating mandate last February, the British government said that if not enough progress was made in the talks by June it would “need to decide whether the UK’s attention should move away from negotiations and focus solely on continuing domestic preparations to exit the transition period in an orderly fashion”.

A senior British negotiating official said on Friday that coronavirus had delayed progress and it was time for talks to move to a different format with a smaller group of negotiators. The official rejected Michel Barnier’s accusation that Britain was disregarding the political declaration Boris Johnson agreed with the EU last October alongside the withdrawal agreement.

“We are committed to the political declaration. We see it, as it describes itself, as a document that sets out the parameters. It isn’t in itself a treaty,” the official said.

The source said that Britain’s offer to accept tariffs on some products rather than agree to level playing field commitments on fair competition fell on “stony ground” in Brussels.