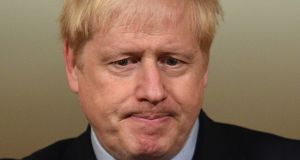 Britain’s prime minister Boris Johnson: scale of the defeeat was a serious blow to the government. Photograph: Leon Neal/AFP via Getty Images)

Boris Johnson’s government has suffered a heavy defeat in the House of Lords over a Bill that would allow ministers to break international law by overriding parts of the Brexit withdrawal agreement. Peers backed by 395 to 169, a majority of 226, an amendment to the Internal Market Bill saying it would “undermine the rule of law and damage the reputation of the United Kingdom”.

The Bill passed all its stages in the House of Commons last month and peers agreed to move on to the committee stage where it is debated in detail and amendments can be proposed. The scale of the defeat, which followed passionate denunciations from leading figures on all sides, was a serious blow to the government.

Cabinet office minister Nicholas True urged peers to set aside their misgivings over the Bill’s treaty-breaking clauses in order to strengthen the government’s hand in negotiations with the European Union.

“The government never have and never will seek north-south barriers in Ireland; equally, we cannot accept east-west barriers in our customs territory. The imperative here is balance. The prerequisite is reason. In the difficult and highly exceptional circumstances in which we find ourselves, it is right that we take these precautionary steps now,” he said.

But former chief justice Igor Judge, who tabled the successful amendment, said the debate had made him more rather than less uneasy about the Bill. And he dismissed Lord True’s argument that the government must be given extra powers in case it needed them in future, saying it could come back to parliament to ask for them when they are needed.

The government’s defeat came as chief negotiators David Frost and Michel Barnier spoke for the second day in succession about the future of negotiations towards a free trade agreement. Mr Barnier said the EU’s door remained open, adding that “we should be making the most out of the little time left”.

Mr Barnier on Monday conceded one of Britain’s key demands by agreeing to intensify talks on the basis of legal texts. But Downing Street said the EU must take a fundamentally different approach to the talks before they could resume following Mr Johnson’s declaration last week that they were dead.

“Movement needs to come from the EU side as well as the UK,” the prime minister’s official spokesman said and Downing Street said later that the situation had not changed.

The two sides have moved closer on the major outstanding issues of fisheries and level playing field guarantees of fair competition in the past two weeks and the expectation in both London and Brussels is that formal talks will resume within days.