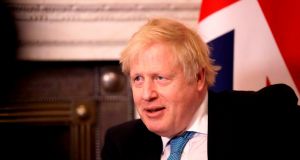 A spokesman for Boris Johnson said ‘we and the EU signed the withdrawal agreement last month and we have said we’ll comply with our obligations’.

British prime minister Boris Johnson’s government has responded sharply to the negotiating mandate adopted on Tuesday by the European Union, accusing Brussels of making unreasonable demands on Britain that it has not made on other trading partners.

Downing Street rejected the EU’s call for “level playing field” commitments on issues such as state aid, taxation and employment and environmental rights.

“The EU mandate stresses (reasonably) the importance of its own legal autonomy. We are equally determined to protect ours. That is the key point of Brexit and is fundamental to the sustainable long-term relationship the EU says it wants with us. The EU has respected the autonomy of other major economies around the world such as Canada and Japan when signing trade deals with them. We just want the same,” it said in a series of tweets after the EU published its negotiating mandate.

“We agree the UK’s trade with the EU is significant. The US’s is on the same scale – yet that did not stop the EU being willing to offer the US zero tariffs without the kind of level playing field commitments or the legal oversight they have put in today’s mandate.”

Mr Johnson signed off on Britain’s negotiating mandate at a meeting of senior ministers on Tuesday and it will be published on Thursday. The first, four-day round of talks begins in Brussels next Monday, with a second round due to take place in London in the week beginning on March 16th.

Downing Street also rejected the EU’s demand that the issue of fisheries should be discussed as part of an overall package and that European fishermen should continue to enjoy access to British waters at current levels.

“The UK didn’t vote twice to take back control of our fishing waters only to give that control up again. As a matter of fact it doesn’t matter what the EU puts in its mandate as we become an independent coastal state on December 31st, 2020,” said the prime minister’s spokesman.

“That means we automatically take back control of our waters and others right to fish in them under the UK convention of the Law of the Sea. This does not have to be negotiated, nor will it be – any access by non-UK vessels to fish in UK waters will be for us to determine.”

Earlier, the spokesman said the government had not asked British ports to prepare for new checks or controls between Great Britain and Northern Ireland. But he said Britain would fulfil its obligations under the withdrawal agreement, including the Northern Ireland protocol and acknowledged that a joint committee between Britain and the EU would “agree a practical system to address goods going on to Ireland, which therefore pay the EU tariff”.

“The PM set out what he understood the protocol to mean, both in the House of Commons and on a number of occasions during the election campaign,” he said. “We and the EU signed the withdrawal agreement last month and we have said we’ll comply with our obligations.”