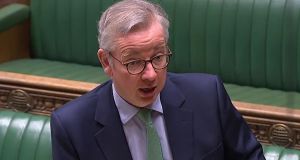 Michael Gove: “It remains difficult to reach a mutually beneficial agreement while the EU maintains such an ideological approach,” he told MPs. Video grab: PRU/AFP via Getty Images

The UK has published draft texts of the deal it wants to govern relations with the European Union, seeking recognition of its product standards and professional qualifications but offering no binding guarantees on fair competition.

British ministers have for months asserted that they are looking for nothing more than a standard free trade agreement and cabinet office minister Michael Gove on Tuesday blamed the EU for a lack of progress in negotiations.

“The EU essentially wants us to obey the rules of their club even though we are no longer members and they want the same access to our fishing grounds as they currently enjoy, while restricting our access to their market. It remains difficult to reach a mutually beneficial agreement while the EU maintains such an ideological approach,” he told MPs.

The draft texts, which have until now been shared with Michel Barnier’s negotiating team but not with EU member states, cover energy, law enforcement, judicial co-operation, social security, aviation, civil nuclear cooperation and fisheries as well as trade.

The draft trade deal would see mutual recognition of automotive standards, and a generous rules of origin regime that would allow components from non-EU countries with which Britain had a trade deal to be treated as British.

After last week’s negotiating round, Britain said the EU would have to drop its demand for level playing field conditions and lower its expectations on fisheries for the talks to lead to an agreement. Downing Street said on Tuesday that the publication of the draft texts was not designed to go over Mr Barnier’s head and appeal to EU leaders.

“We are publishing them as a constructive contribution to the negotiations so they are available to all and so that the commission can share the text with the member states,” the prime minister’s official spokesman said.

“We are not seeking to negotiate directly with member states and never have.”

Mr Barnier welcomed the transparency shown by Britain in publishing the draft texts.

“I welcome the UK’s publication of draft legal texts today. Transparency is very important in negotiations. The European Commission published a comprehensive legal agreement over two months ago. In the next round, we must make tangible progress across all areas, including level-playing field and governance,” he said.

Earlier, Britain’s international trade secretary Liz Truss published a revised tariff schedule that would apply to goods at the end of the post-Brexit transition period. On Wednesday, the government is expected to publish a document outlining how it plans to implement the Northern Ireland protocol agreed with the withdrawal agreement last year.