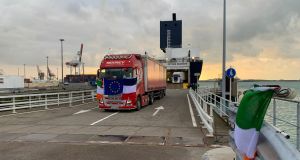 The first truck alights from the DFDS ferry after its maiden voyage from Rosslare Europort in Co Wexford to Dunkirk in northern France. Photograph: Sharon Gaffney. 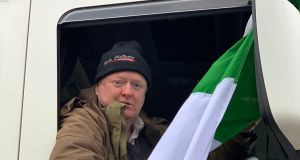 Truck driver John Carroll has his truck decked out in Irish, EU and French flags as he alighted from the ferry. Photograph: Sharon Gaffney. 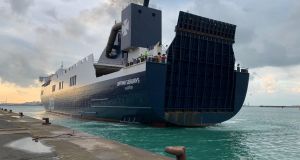 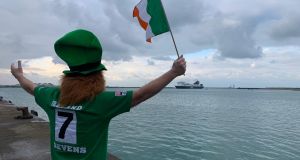 Herve Tembuyser (49) was, despite the cold, decked out in just jeans, a leprechaun hat and an Irish rugby jersey to greet the DFDS ferry as it pulled into Dunkirk Port in northern France on Sunday. Photograph: Sharon Gaffney.

With his lorry decked out with Irish, French and EU flags, truck driver John Carroll was among the first to alight from the maiden DFDS direct sailing from Rosslare Europort in Co Wexford to Dunkirk in northern France.

The service, which is to run six times a week with each crossing taking about 24 hours, was introduced after Brexit took effect. This makes it a longer journey for hauliers but it means they do not have to make customs declarations or face additional checks and inspections crossing from Britain to the UK.

It is seen by truckers as a means of avoiding ‘red tape’ issues on the UK landbridge such as the lengthy delays seen for many vehicles seeking to board ferries going England into the EU.

“It was great,” said Carroll, who works for DG McArdle International, of his overnight journey. “It may have taken a bit longer, but I’ll be at my delivery point in Germany by 9pm tonight...We’re feeling well-rested and ready for the drive ahead.”

Tom Bermingham was another of the 65 truckers who made the trip on the Danish shipping company’s vessel.

“We’re fresh and well-fed, it was a great service,” he said. “We were wrecked before Christmas after being stuck in the chaos at Dover. We’ve avoided all the hassle of driving through the UK.”

The head of the company that operates Irish Ferries, Eamon Rothwell, has insisted that businesses will continue to rely on the landbridge, which he maintains is cheaper, faster and less prone to cancellations caused by bad weather.

But Eoin Gavin, who runs a transport company based in Bunratty, said he had “three trucks stranded all last week” because Irish Ferries’ services into Cherbourg were fully booked.

“We’d have been in an awful mess if it hadn’t been for the direct sailings into Dunkirk.”

Gavin said that in order to use the landbridge he would need to navigate six different IT systems.

“Would you do all that, without taking into account Covid tests and potential delays, or just drive down to Rosslare and hop onto a direct sailing to France?” he asked.

Gavin says his clients have insisted that their goods should not be transported via the landbridge.

“They’re questioning why they should bother with all the extra paperwork involved. If clients refuse to provide us with the necessary invoices and declarations we have no choice but to avoid the UK.”

This point is reinforced by Aidan Coffey, managing director of DFDS Seaways Ireland.

“It’s not just hauliers who decide which routes the trucks should take. It’s also the manufacturers and producers who are telling drivers not to travel through the UK,” he says.

“By using the landbridge, some of them risk being subject to veterinary checks, or even having their products contaminated if the trailers are opened and checked.”

An added bonus, he says is that “direct sailings also allow drivers to take their rest periods during the 24-hour crossing, rather than when they land in France.”

Daniel Deschodt, chief executive of Dunkirk Port, said the new route put Irish drivers “straight into the ‘blue banana’ as we call it in France, straight into Northern Europe”.

“That compares to trucks arriving into Cherbourg, which is a six-hour drive from here. Dunkirk is just 20 minutes from the Belgian border,” he says.

Seamus McKeegan, director of Co Antrim firm McKeegan International, says he is “avoiding Calais like the plague” following the backlog that faced drivers transiting from Dover in the run-up to Christmas.

He says the direct sailings appear to be the best option for hauliers, but would continue to monitor the situation to see how it evolves.

Signage has been installed at Dunkirk port wishing drivers ‘a céad míle fáilte’, but there was also a local man on hand to welcome the ship. Herve Tembuyser (49) was, despite the cold, decked out in just jeans, a leprechaun hat and an Irish rugby jersey.

“I’m French but I feel a little bit Irish,” he said. “I spent a week in Dublin once and I’m engaged to an Irish woman...I hope they launch a passenger service to Rosslare soon. I’ll be the very first customer.”