EU Commission president Ursula von der Leyen has said "it is time to leave Brexit behind" after a deal was reached between the European Union and the United Kingdom. Video: EU Commission 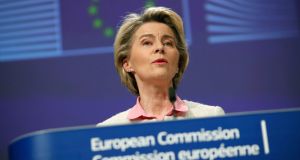 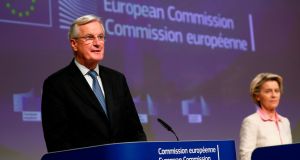 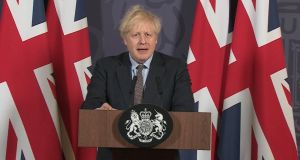 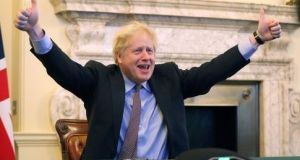 Exhausted negotiators sealed a deal on future relations between the European Union and the United Kingdom after all-night talks into Christmas Eve ended in a compromise to avoid a crash to default trade terms on January 1st.

The deal, which was delayed until the last possible moment by bartering over fishing rights, brings to an end years of uncertainty since the referendum in 2016 that has reshaped Ireland’s political and economic future.

While it still requires approval by Britain and EU member states, the agreement means the worst potential damage to Irish exporters and to jobs should be avoided on January 1st.

Nevertheless, it sets out a much more distant relationship between the bloc and its former member that will mean significant barriers to trade and an end to the seamless interchange between Britain and the continent.

Negotiations went down to the wire to find an agreement on fisheries, with the two sides locked in talks in Brussels working “line by line and fish by fish”, an EU official said.

Ultimately, the EU agreed to cede 25 per cent of the value of the roughly €650 million in fish EU boats catch in British waters each year, for a period of 5.5 years.

After that, access will be set in annual negotiations with the UK, with a “presumption” that access will be given, according to an EU official. If the two sides cannot come to an agreement, the UK must continue to offer access provisionally for three months.

It was disagreement about how the value of the 25 per cent should be measured that caused the last minute delay in announcing the deal, according to the Commission. It was finally reached at 14.44 Brussels time (1.44pm Irish time) on Christmas Eve.

A €5 billion compensation fund will be made available for the EU member states, regions and sectors hardest hit on January 1st, including “fisheries” and “SMEs”, according to an EU official.

“The fisheries sector is of course one of the areas we particularly had in mind,” the official said.

Checks on animals and goods of animal origin between Britain, the EU and Northern Ireland will be onerous, the EU confirmed.

“Any single live animal entering the soil of the EU is individually checked by a vet,” an EU official said.

EU ambassadors are due to meet to discuss the agreement on Christmas Day, in a rush to compete the legalities to bring the deal into force in time for January 1st.

The European Commission is to propose that only EU governments need sign-off on the deal as well as the European Parliament, skipping the need for ratification in national parliaments, even though some elements of the deal involve areas that are solely national powers.

The British government has committed to continue to participate in the Peace Plus programme, the cross-border funding scheme to support Northern Ireland and the Republic, according to the EU.

While accepting Irish fishermen may be disappointed, Taoiseach Micheál Martin said he believes the deal represents “a good compromise and a balanced outcome”. He said the UK “will always be a close friend and partner. Our people, our histories and our economies are deeply entwined”.

“I believe the agreement reached today is the least bad version of Brexit possible, given current circumstances. I know that, more than others, our fishing communities will be disappointed with the outcome,” he said.

Minister for Foreign Affairs Simon Coveney told Newstalk, “Today we finally get certainty that there is a trade deal that I think protects Ireland in the circumstances as well as we could possibly have hoped.”

EU Commission president Ursula von der Leyen said: “We have finally found an agreement. It was a long and winding road but we have got a good deal to show for it.

“Today I only feel quiet satisfaction and frankly speaking relief. I know this is a difficult day for some and to our friends in the United Kingdom I want to say: parting is such sweet sorrow.”

The agreement allows for tariff-free trade between the jurisdiction and co-operation on security and policing, climate change, energy, and transport. While there will be some co-operation in research, Britain decided to leave the Erasmus programme of student exchanges, according to the commission.

There will be a five-and-a-half year phase in period for new arrangements on fishing, the commission announced. Chief EU negotiator Michel Barnier said fishing communities would be supported.

“The European Union will support these fishermen and women, will accompany them, and that is our commitment,” Mr Barnier said. “Today is a day of relief but tinged by some sadness as we compare what came before with what lies ahead. . . To all the Europeans I say, it is time to leave Brexit behind.”

Boris Johnson said the agreement would protect British jobs while restoring sovereignty to Britain and honouring the outcome of the 2016 referendum. He said British companies could do even more business with the EU under the deal, which offers tariff-free, quota-free access for goods.

“We will be able to set our own standards, to innovate in the way that we want, to originate new frameworks for the sectors in which this country leads the world, from biosciences to financial services, artificial intelligence and beyond. We will be able to decide how and where we are going to stimulate new jobs and new hope, with freeports and new green industrial zones,” he said.

Mr Johnson said the agreement offered certainty to businesses and security for its citizens with arrangements to maintain police cooperation and information sharing. And he said it should create a new stability and a new certainty in what he described as the sometimes “ fractious and difficult relationship” between Britain and the EU.

“We will be your friend, your ally, your supporter and indeed – never let it be forgotten – your number one market. Because although we have left the EU this country will remain culturally, emotionally, historically, strategically and geologically attached to Europe,” he said.

Parliament has been recalled to debate and vote on the deal next Wednesday but there is little chance that MPs will reject it. Labour leader Keir Starmer criticised the deal as a thin one but said that his party would vote for it.

“A better deal could have been negotiated but I accept that option has now gone. The chance for renegotiation is over. There are just two paths now left for our country, to move forward with a deal or without one,” he said.

“No deal is simply not an option. The social, economic and political consequences would be devastating. Jobs would be put at risk. Businesses would collapse. Investment would dry up. Our national security would be threatened. The disruption we have seen at the Port of Dover in recent days would be the tip of the iceberg.”

Negotiators began talks on the future relationship this March, and the deal they have reached covers the full span of interconnection, from police and security co-operation, to cross-border energy flows, to road and air transport.

Of the three most difficult issues that long dogged the talks - what authority should judge disputes; how to ensure fair competition between companies; and fish - it was the question of fishing rights that kept the two sides from reaching an agreement until the week before it needs to be in force.

The EU’s starting position was that it should keep all of the €650 million in fish caught annually in British waters by its boats, while London insisted that the whole haul should be given up and doled out in annual negotiations.

Ms von der Leyen assumed a personal role to drag the deal over the line, delaying plans for Christmas with her large family in Germany to stay camped in her apartment the Berlaymont, tic-tacking with phone calls between London and the EU capitals.

The agreement followed weeks of flat-out talks in Brussels in which negotiators on both sides had worked without pause through weekends and evenings to try to finish the 500-page trade deal in record time.

The talks were twice knocked off course during the year by Covid-19 as members of the negotiating teams including Mr Barnier, who himself fell ill, forcing in-person meetings to be rescheduled to video conference. But Britain declined its last chance to opt for more time to negotiate this summer.

Ultimately the pressure of Christmas and Covid-19 combined to harden the resolution of all sides to finalise the talks by Christmas Eve, as disruption to travel due to a new strain of Covid-19 spreading in the UK meant British negotiators feared difficulties getting home.

The deal reached by the negotiators still requires approval in Westminster and by the 27 governments of the EU, which are currently examining the text and preparing the legalities needed to apply it provisionally from January 1st.

Insufficient time remains for the deal to be put to a vote in the European Parliament before its application, meaning the official approval of the deal is expected in the new year. – Additional reporting Reuters