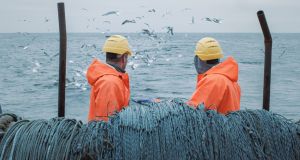 In Ireland more than 16,000 jobs are dependent on fisheries which is worth an annual €1.2bn to our economy. File photograph: Getty

As Britain continues to promote a self-serving narrative around reclaiming its waters and doubling its fish catch after it has fully pulled up the Brexit drawbridge, it’s an opportune time to reflect on the significant gains which the UK has savoured while part of the European Union and its Common Fishery Policy.

It has suited the rhetoric of Boris Johnson – and others before him such as Nigel Farage – to emphasise how much better Britain can do alone and how, when it comes to fisheries, leaving the EU will be bonanza for UK fishermen.

The reality is the UK are in for one almighty wake-up call.

As a result of favourable fisheries deals negotiated by the EU with non-EU states since Britain joined the then EEC in 1973, the UK has netted more than €1 billion worth of additional fish above and beyond what they would have ordinarily been entitled to in the last 10 years alone.

It stands to reason that when you leave a club, you relinquish the benefits which that membership afforded. Therefore Britain cannot expect to retain benefits it enjoyed while an EU member in any future trade agreement.

Moreover, in all of the complex, multifaceted and what have ultimately become tetchy negotiations around fisheries, the UK has spoken boisterously of blocking its erstwhile European colleagues from its waters and doubling its catch.

It would be rank hypocrisy for the UK to expect to slam the door and hold on to its valuable wins that have generated €100 million annually for its fisheries sector since 2010.

With Britain now playing hard ball on fisheries, EU negotiators led by Michel Barnier must spell out clearly that the starting point in any fisheries negotiations has to exclude these additional catches obtained by Britain when part of the EU.

The European Council has stated that if a deal is not reached on fisheries, there will not be a trade agreement. That’s how crucial this facet of negotiation has become for everybody, not just fishermen.

On one level, the UK’s demands are at best disingenuous, at worst dishonest and undeliverable. A nation cannot simply double its fishing quota. Fish know no borders and jurisdiction over waters does not equate to jurisdiction over fish.

Under the United Nations Law of the Sea Convention and the Straddling Fish Stocks Agreement, coastal states have sovereignty over the living resources in their territorial waters while simultaneously having a duty to co-operate for the conservation of resources shared with neighbouring coastal states.

The sea convention’s implementation agreement, in particular the aspect which deals with straddling fish and highly migratory stocks, establishes duties for coastal states and states fishing on the high seas. It reiterates the duty of these states to co-operate for the conservation of living resources. Furthermore, it is important to remember that state parties must apply the precautionary approach – and the obligation of co-operation between coastal states and all other states whose fleets fish these stocks in the adjacent high seas area. The doubling of the catch by the UK government would be in contravention of both the sea convention and straddling stocks agreement. The UK is a signatory to both these documents.

Why then is the UK making these impossible demands on fishing rights? Simply put, the issue has become totemic when it comes to Brexit. Neither side wants to give an inch on fisheries and it is probably the only negotiating space where Britain feels it has the upper hand. British fishermen have long complained that they have got a raw deal from the EU, ever since joining along with Ireland and Denmark back in 1973. This could not be further from the truth as a cool top-up worth €1 billion over 10 years attests. The time for debunking myths is nigh.

The European Council has given its fishing industry a timely injection of hope and confidence in mandating Mr Barnier to stand firm, thereby forcing the UK to make the necessary moves to reach an agreement on fisheries.

The council’s endorsement in mid-October comes at a critical juncture in the talks, with Britain continuing to muddle and bluff but ultimately remaining in negotiations.

Our organisation, the European Fisheries Alliance, which was established less than two months after the British vote to exit the EU, sets out to protect the interests of fleets from national organisations in Belgium, Denmark, France, Germany, Ireland, the Netherlands, Poland, Spain and Sweden.

The alliance accounts for more than 18,000 fishermen and 3,500 vessels with an annual turnover €20.7 billion. We have spelled out repeatedly the catastrophic consequences which a disorderly Brexit would have for the thousands of people dependent on this sector across Europe.

In Ireland alone, more than 16,000 jobs are dependent on fisheries which is worth an annual €1.2 billion to our economy. More than a third of our catch is drawn from UK waters with an even higher dependence where stocks such as mackerel and prawn are concerned. Irish fishermen source 60 per cent and 40 per cent respectively of their catch of these two species in UK waters.

Our position remains crystal clear. We have continually stated that we will not sign up to anything other than reciprocal access to fishing waters between the UK and the EU as well as maintaining our quota shares and ensuring the sustainable management of the stocks.

These are absolutely paramount for the ongoing health of the European fishing industry. Now it is more important than ever that we do not blink. We must hold our ground and reach a deal to continue managing shared stocks in a sustainable manner. One that works for fishermen all over Europe, not just our erstwhile EU colleagues in Britain.