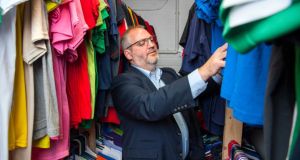 Phil Cone of Academy Crests in Cork. One way or another, he says, their product will be 12 per cent dearer after Brexit if there is no zero-tariff trade deal covering clothing. Photograph: Daragh Mc Sweeney/Provision

Helena O’Sullivan likes the T-shirts she and her staff buy from Phil Cone’s Cork company Academy Crests. For €22, staff get a T-shirt with the creche’s logo and their name printed on it.

“The parents want to put a name on the face,” she says of the customers whose children are looked after at Glenfield’s Community Childcare in Ballyvolan, Cork.

The creche tried different uniforms and T-shirts but the ones supplied by Cone’s business were the most comfortable, she says. She did not know the T-shirts bought from Academy had come from Britain.

She is concerned about Brexit, which she describes as “scary”.

If prices rise due to tariffs or higher shipping costs from the UK, they would have to reconsider. “We would have to look elsewhere. None of us are paid excellently but we want to be presentable and the management couldn’t afford to be spending so much on different uniforms. We are a run by a voluntary group, in a community setting,” she says.

The Cork creche is at the end of a long and well-established supply chain from the UK to Ireland that has been seamlessly developed over tariff-free, invisible trading barriers for decades.

All that could change, unless the EU and UK can agree a trade deal between Brexit day on Friday, when the UK formally leaves the EU, and the end of the standstill transition period on December 31st, the deadline set by British prime minister Boris Johnson to agree a future EU-UK trade deal.

Britain is the main source of imports for Ireland, accounting for 20.1 per cent of all products brought into the country in 2018, according to Central Statistics Office (CSO) data. In value terms, they are worth €19 billion, well ahead of the US (€17 billion), France and Germany (both €11 billion).

Ireland’s percentage of imports sourced from Britain rose in the first seven months of 2019 by 22 per cent to €11 billion, so – despite Brexit and all the uncertainty during 2018 around whether it was going to happen or not – Britain is still an important market for Irish firms sourcing materials.

Much focus in the Brexit debate has been on the UK as a significant export market for Irish businesses, but – in value terms – imports are more significant: CSO data shows Ireland imported €3 billion more in goods from Britain than it exported to the country in 2018.

The UK’s decision to leave the EU means these valuable supply chains will undergo significant changes.

Behind the billions in traded goods every year are hundreds of thousands of customers, such as O’Sullivan and her creche, who benefit from the free trade and the tariff-less movement of goods between Ireland and the UK.

These chains will change or possibly be severed by Brexit.

To prepare for Brexit, businesses must adapt or die. Each link in the chain of supply between the UK and Ireland is taking different positions. Following the journey of the T-shirts through the chain shows the challenges posed by Brexit.

One link up the supply chain from O’Sullivan, Phil Cone at Academy Crests has been making preparations to safeguard his own supply of garments in what is known as the “overbranded” or “brandable clothing” market.

He is still buying products from large garment distributors in Britain, but he now places his orders through a Dublin supplier: Caramba, in Finglas. It has started importing clothing in much larger bulk volumes directly from UK suppliers.

“We were looking to change and we had found some European suppliers in France and Spain and we put in some trial orders with them but since then the UK suppliers have done a deal with the Irish supplier [Caramba],” says Cone.

The concern on the Irish side of the supply chain that sources the Henbury-branded T-shirts for O’Sullivan’s creche staff and other customers is the 12 per cent import tariff rate that would apply on clothing should the UK leave the EU without a tariff-free trade agreement by the end of this year.

Johnson’s Brexit deal will create the transition period for the next year where the EU and UK will continue trading, tariff-free.

However, as Barnier warned on his visit to Dublin on Monday, a potential “cliff edge” looms again on December 31st, 2020, under Johnson’s plans to add a new clause to the Brexit Bill to rule out any extension to the transition period.

The Brexit effect on business means higher costs for companies and customers. The rising cost of buying his products means that Cone will have to pass those costs on to customers.

“On all UK products coming in, there will be a 12 per cent increased charge. For us, we go straight back to the customer. It is not as if our customers are not aware of Brexit – they are anticipating that prices will go up,” he says.

Cone says the alternative is that he switches and buys his T-shirts from a European supplier to avoid the tariff, but he is reluctant to do this because of the long-standing relationship he has built up with Vincent Brown, who owns Caramba. Brexit is forcing him to reassess things.

“Look, we do have other suppliers in Europe – it does mean we could get the product from someone else in Spain without the 12 per cent increase. Vincent knows that, but I built up a long relationship with Vincent. We don’t want to do it,” he says.

In Dublin, Brown is taking his own risks to navigate the Brexit-related changes facing Irish and British businesses to ensure he can keep selling T-shirts.

Rather than incurring heavy customs costs on regular, small volumes of orders of T-shirts and other clothes purchased from UK distributors and imported into Ireland, Brown will now buy in much larger bulk, importing garments in bigger orders for his customers.

He concedes that UK-sourced products are likely to be subject to the 12 per cent tariff and costly delays at ports, so he is looking further afield to Europe and the Far East for alternative supplies. Some customers, though, have been wearing British products for years and will be reluctant to change. They would be willing to pay a higher cost for a T-shirt because of Brexit, he believes.

“Brexit does present an opportunity because it makes it more difficult for our competitors to sell here. It allows us to take a greater market share; but the elephant in the room is the potential for the country to go into recession and then you can have a bigger share of a market that is in decline,” he says.

“We are only just getting on our feet since the last recession, because it hit us very hard. The last thing we want is to get plunged into another. If we commit chunks of money in large stock and sales dry up, that is a difficult scenario for us but a very real potential.”

One way or another, he says, their product will be 12 per cent dearer after Brexit if there is no zero-tariff trade deal covering clothing, so they will have to find a “workaround”.

“Any products that we source from the UK market will be 12 per cent dearer. Where we have potential is to bring on or develop alternative products from elsewhere.”

CSO figures show that “miscellaneous manufactured articles” such as clothing accounted for €1 billion worth of imports from the UK in 2018, about 5 per cent of overall imports from the country. This makes Ireland a valuable market for British exporters.

One of Caramba’s main UK suppliers, who does not wish to be named, says Brexit will put companies like his at “a 12 per cent disadvantage” and there will be additional logistical issues managing a new trade border that will affect next-day deliveries.

“It disadvantages UK suppliers because Irish companies will be able to buy the same garments but from EU-member trade companies, although with a slight delay because they have to be shipped,” he says.

“It is making it harder for UK companies who have a strong heritage of trading with Ireland and Northern Ireland as if it is the same market.”

The possibility of checks at English and Irish ports under Johnson’s new post-Brexit Irish Sea trade border will slow the flow of business and goods.

Overall, the fallout from Brexit has created “a great deal of uncertainty”, he says. “Me or Vincent in Caramba, none of us want barriers between us in doing this,” he says.

“It is frustrating in that we have built up relationships at a business and commercial level and spent many years building customers. We have become friends over the years. Naturally those relationships could be adversely affected.”

Ireland in Numbers is an Irish Times initiative to explore the stories behind the data. The data used has been provided by the Central Statistics Office