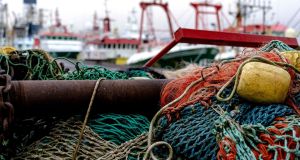 The Taoiseach acknowledged the severe impact the outcome of the Brexit negotiations would have on the fishing industry. Photograph: Sander Koning/ANP/AFP

Taoiseach Micheál Martin has conceded that the post-Brexit trade deal between the EU and the UK will have a significant impact on Ireland’s fishing industry.

Speaking just before a specially convened Cabinet meeting on Monday, Mr Martin said he, Minister for Foreign Affairs Simon Coveney and Minister for Agriculture Charlie McConalogue had held a virtual meeting with fishing industry representatives earlier on Monday to discuss the implications of the deal.

“The deal does impact negatively on our fishing industry. A no-deal [Brexit] would have been far worse, but there is a significant negative impact, particularly on the mackerel sector and prawns.

“Therefore we commenced a series of engagements to work our way through this,” said Mr Martin.

However, he said the overall deal which had been achieved had prevented a very difficult year ahead for Irish society and its economy.

“We have avoided a no-deal which is a very significant achievement for the country and it enables us to access the UK market in a non-tariff and non-quota way,” he said.

“Overall this deal gives a good platform for the Irish economy to recover particularly post-Covid, and we have avoided what would have been a very significant negative hit to the economy if there was a no-deal on Brexit.

“It’s good news for [the] Irish economy and Irish exporters.”

He said the meeting with fishing representatives was part of a series to find the best way of dealing with the situation arising from the deal, and to stimulate investment for communities in fishing towns such as Killybegs and Castletownbere.

Later on Monday, Tánaiste Leo Varadkar and Mr McConalogue confirmed the establishment of a new €100 million scheme to help the agrifood sector respond to Brexit.

In a statement on the new Capital Investment Scheme for the Processing and Marketing of Agricultural Products, Mr Varadkar said: “We know that Ireland’s agrifood sector is particularly exposed to the negative impact of Brexit. More than 173,000 people work in the agrifood industry here.

“This funding is to allow businesses invest in new technology and new products, making the sector stronger and more resilient.”

Mr McConalogue added: “Our agrifood sector is the largest indigenous sector in Ireland with export value of €14.5 billion last year.

“This €100 million support scheme will assist our food processors to diversify their product ranges and markets in order to best support their export activity and our country’s primary producers.”

The scheme will be managed by Enterprise Ireland.

Mr Martin had previously said the €100 million package would aim to help the agrifood industry meet new non-tariff barriers that will now come into play following the end of the Brexit transition period at the end of the year.

The Irish South and West Fish Producers Organisation (ISWFPO), one of the organisations involved in the two-hour online meeting, said the Brexit deal secured by the UK meant change was now necessary.

The agreement struck on Christmas Eve saw the EU cede 25 per cent of the value of about €650 million in fish caught in British waters by EU boats every year.

Patrick Murphy, chief executive of the ISWFPO, said the European approach to fishing should now shift to so-called zonal attachment, a system allowing a greater share of fish for coastal countries in whose waters they are most often found.

“[The UK] aren’t giving up one kilo of their own fishing rights in European waters, they are getting a big top-up,” he said. “That means that everything has to change.”

Similarly, the Killybegs Fishermen’s Organisation (KFO) used the meeting to seek a redistribution of fish quotas among European nations to reflect the disproportionate hit taken by the Irish fleet, especially in mackerel.

“The hit we are getting on mackerel is huge,” said chief executive Seán O’Donoghue. “There is nobody that can stand up and say Ireland took a proportionate hit here. Mackerel is so bad that if we don’t address it, it will have dire consequences for our industry and for Donegal.”

Although they were angered at the outcome of the Brexit fisheries negotiations, the two groups said the Taoiseach had acknowledged how serious the situation now was for Ireland. Both also seemed satisfied, at least for now, by a Government commitment to address the sector’s concerns over the planned series of meetings.

“If you are going to look for alternative proposals or ideas then it’s a good step to go to the people with that knowledge,” Mr Murphy said.

The UK parliament will meet on Wednesday to vote on the trade agreement, and is expected to ratify it.

At a meeting of EU ambassadors in Brussels on Monday, the 27 member states gave their support for the 1,246-page treaty to be “provisionally applied” at the end of the year.

Also on Monday, Mr Varadkar said Brexit will result in the Irish economy growing by 2 or 3 per cent less than it would have over the next 10 years, but it will not cause a recession,

The Tánaiste said some disruption at ports is anticipated as Britain leaves the EU single market and customs union on January 1st. Mr Varadkar said businesses would have to be prepared for “red tape” concerning customs declarations and checks.

Mr Varadkar told RTÉ’s Morning Ireland that while there would be disruptions, the situation could have been worse.

“Just think how different it could have been. Four-and-a-half years ago, when the UK voted to leave the European Union, we were worried about a hard Border between North and South. We were concerned that our businesses – our farmers, our agrifood sector – could face tariffs on trade with Britain.

“This is a much softer Brexit than the one we feared 4½ years ago.”

Asked about potential job losses amid Brexit, Mr Varadkar said there were supports in place for various sectors.

There is also €5 billion available from the EU Brexit adjustment reserve fund, some of which will be used to assist the Irish fisheries sector, he said.

“In terms of the impact on the economy, we estimate what we’ll see over the course of the next 10 years is the economy growing . . . by 2 or 3 per cent less than it would, but not causing a recession,” said Mr Varadkar.