Brexit talks: why a fishing deal is proving difficult and why it matters to Ireland 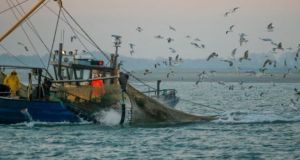 Fishing is a political symbol for the UK government that it is ‘taking back control’. File photograph: EPA

Fisheries remains the final obstacle to the EU and UK reaching a wide-ranging post-Brexit trade agreement, but the two sides are still far apart on the issue.

Why is fishing so important?

Fishing should amount to little more than sprat in terms of economic significance in the stormy seas that are the negotiations between the EU and UK on a post-Brexit trade deal, but politically it is a whale of an issue. Fishing accounts for less than 1 per cent of EU gross domestic product and even less for the UK, at 0.1 per cent of economic output.

But fishing is politically a totemic battle prize: a symbol, for the UK government, that it is in fact taking back control, as Brexiteers promised – in this case, of its waters – and delivering a tangible Brexit to the fishing communities around the UK’s coasts that voted overwhelmingly to leave the EU in the June 2016 referendum.

What is at stake?

The EU and the UK have an interdependent relationship on fishing. The EU relies on fishing in UK waters in the North Sea, around the Scottish coast and in the seas north of Northern Ireland, for a large share of its catch, while the UK relies on EU markets to sell the fish – as much as 75 per cent – that it catches in its own waters. Scallops, squid and langoustines caught by English boats in the English Channel and herring and mackerel caught by Scottish boats are shipped overseas, while the most popular fish consumed in Britain - cod, haddock, tuna and salmon - are imported.

The EU wants to maintain access to UK waters after Brexit and a large share of what it catches there, but the UK wants to take back control of access to its own waters for an extended period and to avoid fishing quotas on stocks that, it says, would put its own industry at a disadvantage.

The two sides have been an ocean apart during the negotiations. EU’s chief negotiator Michel Barnier, a former French fisheries minister, had suggested the EU fishing fleet take a cut of 15 to 18 per cent in the share of what it catches in UK waters, while UK negotiator David Frost had initially wanted to take back 80 per cent of the €650 million of fish caught by EU boats but has since reduced this to 60 per cent.

What is at stake for Irish fishing boats?

Quite a lot. Irish fishing ports are heavily reliant on continued access to UK waters. About 60 per cent of mackerel landed by Irish trawlers is caught in British seas, to the north and west of Scotland, while 40 per cent of Dublin Bay Prawns caught by Irish boats are fished in an area known as “The Smalls” to the west of the Scilly Isles off Cornwall on the English coast.

The Irish industry has warned that depriving Irish boats of continued access to these valuable fishing grounds would cause severe economic damage to fishing ports around the Irish coast, from Killybegs in the north west to Kilmore Quay in the southeast.

About a third of all Irish fishing volumes are caught in British waters so no trade deal would hurt an industry employing about 16,000 people, including 4,000 people who are fishing on 2,000 boats. The Irish fishing industry has estimated it could lose up to 40 per cent of its workforce if there is no deal. This would disproportionately affect coastal areas where other jobs are scarce, and take a huge economic hit to the €1.25 billion industry, losing as much as half of its value.

How has the Irish industry argued its case?

The Irish have sought protection in the all-encompassing nature of the trade negotiations, pushing the issue of fishing into a strategy of ‘nothing is agreed until everything is agreed’ where UK demands in other trading areas can be used as leverage to secure a better deal on fishing.

The other significant argument made by Taoiseach Micheál Martin, Minister for Foreign Affairs Simon Coveney and others in the fishing industry is that “fish don’t do borders”. They argue fish are migratory assets – essentially shared stocks between the EU and the UK – and should be recognised as such by the British: fish spawn in Irish and EU seas and are caught in UK waters.

Irish boats land mackerel in UK waters in the winter months when their fat content is highest and when they are most in demand, particularly by buyers from the Far East. Being forced to catch mackerel earlier in the year means they would be caught and sold at a time when they are smaller and less valuable and there are fewer buyers, which would affect the Irish fishing sector’s business.

Have there been other complications in the talks?

Yes, quite a few. The UK had, at one point, wanted to strip out pelagic fish stocks out of the post-Brexit trade agreement and have them dealt with separately and later in an informal alliance of fishing nations. It had also wanted access to UK waters to be negotiated on a short-term basis, leaving the matter unresolved outside a trade deal and the Irish fishing industry unable to plan and invest ahead without knowing whether it had continued access to important fish stocks.

A last-minute difficulty has emerged in talks where the EU wants to be able to retaliate if, after a period of adjustment, the UK shuts off access to EU fishing boats in its waters in the future. Brussels wants the trade agreement to include a provision showing how it could react by introducing new barriers to some trade from the UK, particularly on fish products, if it were to lose the capacity to fish in British waters.

Will there be a deal?

It is hard to say, but the cost of not agreeing a deal – surrendering agreement across a range of other trading areas – may concentrate minds in the coming hours and days on the issue of fishing.