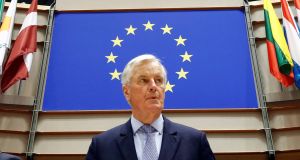 British and European Union negotiators are to reconvene on Wednesday to try to salvage Brexit talks after an already tight schedule to agree a deal was knocked out by the coronavirus pandemic.

Lead negotiators Michel Barnier and David Frost will meet by video conference in their first official appointment since talks were delayed as Mr Barnier tested positive for coronavirus in March, sending both negotiating teams into isolation.

The aim of the video conference is to agree a “calendar of next steps”, according to an EU source. Negotiators had been scheduled to meet five times by May in rounds of talks that were supposed to alternate between Brussels and London, but have been unable to meet in person for the first of these due to the pandemic.

The UK is due to leave its transition period – under which it continues to trade with the EU under the same terms as before – at the end of the year.

Even before the pandemic threw talks off course, agreeing a deal on time had already been viewed as challenging due to the complexity of the trade relationship.

But the UK government insists it will not seek to extend the deadline, which it has the option to do under the withdrawal agreement if it chooses to do so by June.

A UK spokesperson said a press report that British negotiators would seek a rolling one-month extension of the transition period was “completely untrue”.

“We remain fully committed to the negotiations and, as we have been clear, discussions with the commission are continuing. The transition period ends on December 31st, 2020, as enshrined in UK law, which the prime minister has made clear he has no intention of changing,” the spokesperson said.

“We are looking at alternative ways to hold the negotiations despite the ongoing coronavirus crisis.”

If no deal is agreed and the UK’s transition period ends as scheduled at the end of the year, the UK will automatically begin trading with EU states on World Trade Organisation rules, a change that is estimated to hit the Irish economy hard.