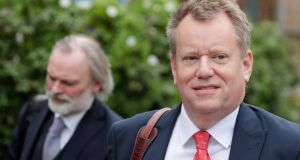 Britain’s chief negotiator David Frost said the face to face talks in Brussels had been useful and that the negotiating teams will meet again next week in London as planned. Photograph: Stephanie Lecocq / EPA

The latest round of talks between Britain and the European Union about their future relationship have ended a day early with both sides saying significant differences remain. Britain’s chief negotiator David Frost said the face to face talks in Brussels had been useful and that the negotiating teams will meet again next week in London as planned.

“We have completed our discussion of the full range of issues in the negotiation in just over three days. Our talks were face to face for the first time since March and this has given extra depth and flexibility to our discussions.

“The negotiations have been comprehensive and useful. But they have also underlined the significant differences that still remain between us on a number of important issues. We remain committed to working hard to find an early understanding on the principles underlying an agreement out of the intensified talks process during July,” he said.

At a video conference last month, prime minister Boris Johnson agreed with the presidents of the European institutions to step up the pace of talks during the summer and the two sides will meet every week in July and into next month. But EU chief negotiator Michel Barnier suggested on Thursday that they had not succeeded this week in injecting “new dynamics” into the talks.

“Our goal was to get negotiations successfully and quickly on a trajectory to reach an agreement. However, after four days of discussions, serious divergences remain. The EU side had listened carefully to UK prime minister Boris Johnson’s statements in recent weeks, in particular, his request to reach a political agreement quickly, and his red lines: no role for the European Court of Justice in the UK; no obligation for the UK to continue to be bound by EU law; and an agreement on fisheries that shows Brexit makes a real difference,” he said.

But Mr Barnier said after the talks ended on Thursday that there could be no deal on an economic partnership without level playing field guarantees, a “balanced, sustainable and long-term” agreement on fisheries and an overarching institutional framework and effective dispute resolution mechanisms.

The EU last month indicated that it was willing to compromise on the issues of fisheries and level playing field commitments on state aid and Mr Barnier said his negotiators had “engaged constructively” with Britain’s demands.

“The EU expects, in turn, its positions to be better understood and respected in order to reach an agreement. We need an equivalent engagement by the United Kingdom. We continue to believe that an agreement is possible and in everyone’s interest,” he said.

European Commission president Ursula von der Leyen said the EU wanted a trade agreement with Britain “but not at any price” and that it must include fair competition conditions for European industry.

“The agreement must achieve this, and as of today we are still a long way apart. We are a long way away from a common denominator with our British friends,” she said. “We must work at high pressure but we must, parallel to the negotiations, prepare for every other outcome.