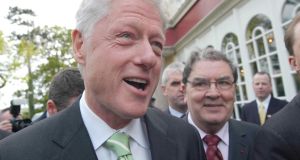 Former US president Bill Clinton has said that the EU-UK negotiations on a post-Brexit trading arrangement are creating “tremendous uncertainty” in Northern Ireland.

Mr Clinton, whose US administration was instrumental in the peace process in the 1990s, said the peace achieved two decades ago was something that “everyone should hold in their minds and hearts as we continue to work to the remaining challenges”.

“I know that even today not all the problems in Northern Ireland have been solved, that the gridlock of recent years has taken a heavy toll, and that the ongoing Brexit negotiations are creating tremendous uncertainty,” he said.

The former president, speaking at an event on Irish-American relations hosted by Georgetown University in Washington, evoked his trip to Belfast before Christmas 1995 and the peace process built since then as the main focus amid the challenges.

“When I think back to all the hopeful faces I saw on that trip 25 years ago, and the pleas of the children whose only Christmas wish was for the bloodshed to end, it is so important to step back and remember that the peace we achieved through the Good Friday Agreement has held,” he said.

He hoped that bonds between the US and the UK would “be strengthened” and that peace and democracy in Northern Ireland would “continue to hold”.

Minister for Foreign Affairs Simon Coveney said he believed the incoming US president, Joe Biden, would “continue to allow extraordinary access” to the White House for Irish politicians.

Mr Coveney said Mr Biden’s intervention during the presidential campaign, warning about the risk of Brexit to the peace process, was a “reminder to Irish people” that he is “emotionally connected to Ireland” and “understands and feels a relationship with the peace process”.

“We are looking forward to seeing how we can maximise the potential of that relationship,” he said during a panel discussion featuring US congressmen Richie Neal and Pete King.

Mr Coveney said the UK government did not like the statements of support for Ireland from Mr Biden and politicians on Capitol Hill and were concerned by them. He dismissed claims by hardline Brexiteers that Mr Biden was no friend of the UK as “complete nonsense.”

Mr Neal, a high-ranking congressional Democrat and chairman of the powerful House of Representatives ways and means committee, said he expected Mr Biden to “embrace the tenets of the Good Friday Agreement”.

Separately, a senior PSNI officer has warned that organised crime gangs could exploit the Border for human trafficking after the end of the post-Brexit transition period.

Assistant Chief Constable Mark McEwan said that if security at ports in Britain is perceived to be tightened after December 31st, criminals could use Northern Ireland to move people into other parts of the UK.

“We already know that we have people either brought in by air or sea to Dublin and then perhaps exploited there for a certain period of time and then moved to Northern Ireland and into Great Britain,” he told the House of Lords EU Security and Justice subcommittee.

“We also know we have organised crime groups who will move across Europe effectively carrying out criminality as they go and sometimes we see them coming in again through air or sea in Ireland and up to Northern Ireland and into Great Britain.”

Mr McEwan said that 16 of the 83 criminal gangs known to be active in Northern Ireland operate on a cross-Border basis. He said that although co-operation between the PSNI and An Garda Síochána is highly effective, Brexit would mean that some information-sharing mechanisms would have to be replaced by new equivalents.

“Any replacement for the existing mechanisms is likely to look a little like moving from wifi to modem. It will slow things down to say the least,” he said. “We expect it to be suboptimal but operable.”