Brexit: State could face checks on up to 460 trucks from UK every day 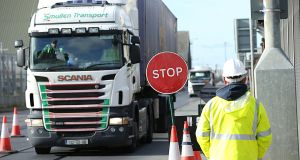 State inspectors checking agriculture and food consignments at Dublin Port could face new checks on up to 460 trucks a day arriving from the UK after the country leaves the EU single market on January 1st.

Department of Agriculture analysis carried out to assess the extent of new food sanitation and animal produce regulatory checks after Brexit found there were 168,710 lorries potentially bringing agri-food produce into the country in the year to February that would require checks next year.

Some 41 per cent of the 408,000 “roll-on, roll-off” truck consignments arriving into Dublin Port, the country’s busiest port, in the year to February 25th last were found to have been of potential interest to the department based on the description of goods given to the ferry operators.

This amounts to 462 trucks a day that would require checks, through officials may only have to carry out documentary checks in advance and will aim to avoid physical checks.

State officials currently deal with 3,000 “third country” assignments. From January, this will surge in number given the volume of trade in agri-food products from the UK.

The nature of the EU single market means State inspectors do not currently know the volume of consignments coming in from the UK that will need to be checked from next year.

To cope with the increased paperwork and checks, customs officials with the Revenue Commissioners and Department of Agriculture inspectors will move to “24-7” out of hours work from the start of next year.

The expectation is that 92 per cent of trucks coming into or leaving the country would be “green-routed” through a fast-track channel for customs declarations, though the significant volume of agri-food coming into the country from Britain poses much greater challenges.

State officials plan to clear as many consignments in advance and to work to minimise the impact on trade by only doing what is necessary to meet regulatory requirements.

The Government announced new supports to help businesses prepare for the UK’s departure, and published a new Brexit Omnibus Bill to be brought before the Oireachtas in the autumn.

Tánaiste and Minister for Enterprise, Trade and Employment Leo Varadkar said “economic Brexit” was happening at the end of the year, and that “free trade deal or no free trade deal”, the UK would be leaving the EU single market and customs “in little more than 16 weeks”

This would result in “more bureaucracy, barriers, checks and friction,” he warned.

“For companies that trade with Britain, things will not be the same. This won’t be business as usual and this is not a drill. You need to prepare for the new normal and you need to get ready now,” he said at a press conference announcing the Government’s supports.