The EU's chief Brexit negotiator Michel Barnier says that the Northern Ireland protocol in the current Brexit agreement was important to ensuring there was no physical customs border between Ireland and Northern Ireland. 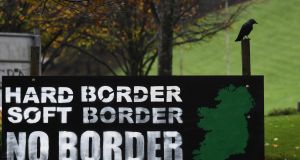 There is surprise and anger on both sides of the Irish border and in Brussels at a reported British plan to potentially undermine the withdrawal pact. Photograph: Getty

Politicians and senior officials in the Irish Government played down the reports that the British government was preparing to override parts of the EU-UK withdrawal agreement in legislation to be published later this week.

The Financial Times reported Sunday night that sections of the withdrawal agreement – agreed last year between London and Brussels after years of negotiation – could be set aside by legislation being prepared by the British government.

The sections in question are related to Northern Ireland and state aid provisions, the FT said, including arrangements for goods imported into the North from Great Britain.

The agreement stipulates that the North will be treated differently to other parts of the UK in order to maintain an open border in Ireland, but it has been unpopular with unionists and some elements in the Conservative Party.

The revelations sent shockwaves around Europe, though officially the EU said it expected the UK to live up to its obligations under the treaty signed last year.

The Minister for Foreign Affairs Simon Coveney said if the British government brought forward the legislation as reported by the FT, it would be “a very serious breach of trust”, which, he said, would “fundamentally undermine the negotiations going on at the moment”.

Mr Coveney said this was an international treaty so if it is not going to be implemented it will undermine trust between parties.

“I hope that it is a fake story and that it is not going to be as serious and as negative as some people are suggesting,” he told RTE Radio One.

The Irish and European position was very clear, “we’re polite but firm”, he said.

Tánaiste Leo Varadkar said the Brexit negotiations may feature “a certain level of sabre-rattling” and “posturing” in the coming weeks.

Mr Varadkar said he expects the United Kingdom to honour commitments given under the withdrawal agreement struck with the European Union.

The Minister for Business was speaking at the launch of the State’s €2 billion credit guarantee scheme, and after reports emerged that Downing Street was planning to use domestic legislation to undermine aspects of the Northern Ireland protocol contained within the withdrawal agreement.

While he said he couldn’t speak for the British government, or speculate on their motivations, Mr Varadkar said: “what I can say is that we are into the last few weeks of negotiations between the EU on the one side and the UK on the other… so at this point in the negotiations you often see a certain level of sabre rattling and a certain level of posturing, if you like.”

He said the Irish government’s response to the developments would be “measured”.

“In the meantime we’ll continue with negotiations to try and secure with the UK a free trade agreement which will involve no tariffs and no quotas on trade between the two countries,” he said.

There was surprise and anger on both sides of the Irish Border and in Brussels at the reported British plan to undermine the withdrawal pact.

“I trust the British government to implement the Withdrawal Agreement, an obligation under international law & prerequisite for any future partnership,” said Ursula von der Leyen, head of the European Commission.

“Protocol on Ireland/Northern Ireland is essential to protect peace and stability on the island & integrity of the single market,” she added on Twitter.

Sinn Féin leader Mary Lou McDonald said it was “completely unacceptable” for the British government if reports were true that it is willing to walk away from commitments to the Irish protocol in the Withdrawal Agreement.

“I want to make it absolutely clear that the agreement and the protocal are binding and it is not for the British government to step away from commitments that were entered into in an international agreement,” she said.

“I want to sound a very strong note of concern that at this stage, very late in the day in terms of the negotiations, that Ireland would be used as a pawn by the British government. That is completely unacceptable.”

She said Ireland could not be collateral damage for a Tory Brexit.

Ms McDonald said her office had been in contact with the offices of British prime minister Boris Johnson and the EU’s chief negotiator Michel Barnier on the latest developments. She said that she had not been briefed as yet but said she expected not alone to be briefed by the Government but also to be asked to put her shoulder to the wheel.

She said she wanted to be part of protecting the interests of the island of Ireland and hoped the Government would take her offer in the “good faith that I intend it.”

British environment secretary George Eustice said the government was committed to implementing the Withdrawal Agreement but some legal ambiguities needed to be tidied up over the Northern Irish protocol. “We are not moving the goal posts,” he told Sky News.

EU chief negotiator Michel Barnier acknowledged anxiety but declined to comment on the FT report. “I remain worried ... the negotiations are difficult, because the British want the best of both worlds,” he told France Inter radio.

“We expected a busy September alright,” said one senior Irish source. “But let’s see what the detail is.”

It is understood, however, that officials will make inquiries with their counterparts in London and seek assurances that the UK will abide by the terms of the Northern Ireland protocol, which promises to maintain and open border on the island.

“This is a country that wants to make trade deals with the rest of the world,” said the source. He questioned how the UK could approach such negotiations “if you walk away from the last deal you did?”

Another source said that a British move to increase tension in the negotiations was not unexpected. “I see we are also going to dump [Michel] Barnier again,” he said referring to the latest reports in the British press about the imminent sidelining of the EU’s chief negotiator. Such reports have appeared several times during the negotiations, but have not, so far, proved true.

Sources in Dublin also pointed to the reaction from trade experts in the UK, many of whom pointed out the difficulty of negotiating future trade deals if the UK reneges on the withdrawal agreement.

But while Dublin was playing down the reports, it’s expected that there will be quiet approaches to British government sources to assess the mood in Downing Street as the Brexit process moves towards a hectic and fraught autumn.

Irish sources concede that the advent of the Johnson administration has made it more difficult to read the intentions of the British government.

The worry also persists that failure to agree a trade deal would see the British government walk away from the provisions of the withdrawal agreement that maintain an open border in Ireland – leading to EU pressure on Ireland to secure the border. That is regarded as a nightmare scenario by many in Dublin.

If no deal is agreed, Britain would have a trading relationship with the bloc like Australia’s, which would be “a good outcome”, British prime minister Boris Johnson is expected to say on Monday.