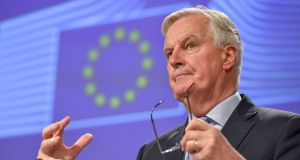 Planned talks between the European Union and United Kingdom to decide their post-Brexit relationship will not go ahead in London next week due to the coronavirus pandemic, the negotiators announced in a joint statement on Thursday.

“Given the latest COVID-19 developments, EU and UK negotiators have today jointly decided not to hold next week’s round of negotiations in London, in the form originally scheduled,” a joint statement from the sides read.

“Both sides are currently exploring alternative ways to continue discussions, including if possible the use of video conferences.”

The talks next week were set to be the second of several rounds that had been planned to alternate between Brussels and London until May. Britain is in a transitional arrangement until December 31st, when steep tarriffs will come into place on all UK-EU trade unless a deal is agreed.

Either way, the change is forecast to hit the Irish economy, particularly exports to Britain. Britain can ask for an extension of the transitional period before July, but the administration of prime minister Boris Johnson has insisted it will not do so.