Phil Hogan concerned at decreasing focus on Brexit in Ireland 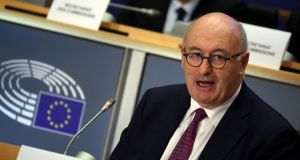 EU trade commissioner Phil Hogan said the talks on a post-Brexit trade deal were the first time the EU was negotiating with a country that wanted to diverge from the bloc. Photograph: Reuters

EU trade commissioner Phil Hogan says he is concerned at the decreasing focus in Ireland on Brexit, despite repeated Government attempts to highlight the issue.

“The difficult part of Brexit is only beginning,” he told an audience in Dublin on Friday, referring to talks on a new trade deal under way between the EU and the UK.

“Things are going to be different on January 1st” next, whether there was a deal or not, and companies needed to spend more time thinking about that, the commissioner said.

He said the talks had “gotten off to a serious start”, despite the challenging rhetoric coming from the UK in recent weeks.

Mr Hogan said he was not worried about suggestions that the UK would not observe the agreement reached last year on the Irish Border issue.

He noted the chief UK negotiator, David Frost, had confirmed this week that the UK would respect its legal agreements.

Asked about British prime minster Boris Johnson saying the UK would consider in June whether it should walk away from the talks, Mr Hogan said it was “not helpful for any side to be saying they want to walk away from discussions that have just started. It is a very unusual way of negotiating”.

However, the negotiations were unusual, he said. It was the first time the EU was negotiating with a country that wanted to diverge from the EU, as opposed to wanting to converge.

The UK’s negotiating team, he said, should study closely the expert reports drafted about the likely effect on various sectors of the UK economy, in the event of a “no-deal” exit of the UK from its trading relationship with the EU.

The EU was contemplating “doing a deal with our neighbours and friends in the United Kingdom and we are not contemplating any other result”, the commissioner said.

However, the EU “could not rule out what the UK will do, to provoke us to walk away, but we are not planning for that”.

The tactic of a “No-Deal Brexit” cut no ice in the negotiation of the Withdrawal Treaty, the commissioner said. “And it will not cut any ice in the talks for a trade agreement.”

In his address in Dublin entitled, “EU Trade Amidst Global Uncertainty”, Mr Hogan spoke about the EU’s work on trade in the context of Brexit, the Trump presidency and the increased role played by China in global trade.

“We will be a more geopolitical commission, asserting our interests more forcefully both at home and abroad,” he said. “In today’s world, this is not a choice but a necessity.”

Those with whom the EU negotiated agreements, would be expected to live up to EU standards, he said.

The commissioner said China “is exploiting gaps in the international rulebook to further its consolidation of global power. Unfortunately it often does so in a manner that makes a mockery of level playing fields and fair, rules-based trade”.

In relation to the US, he said the two sides were taking slow and small steps towards a “mini-deal”. He would be in Washington DC next week when he hoped further progress would be made.

“The EU Commission view is that a strengthened consensus with our American friends remains the single most effective way to deal with some of the urgent challenges facing the global community.”

On the coronavirus issue, Mr Hogan said the relaxation of state aid rules could be agreed with countries that made a convincing case, so that companies and others facing exceptional challenges could be helped.

“If we get the evidence, we will move as quickly as we can.”