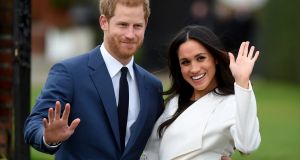 Britain’s Prince Harry with Meghan Markle after they announced their engagement in November 2017. Photograph: Facundo Arrizabalaga/EPA

When Queen Elizabeth spoke in the Irish language to address the crowd at Dublin Castle in 2011, it felt like a special moment. But by the end of the decade Brexit would disrupt Anglo-Irish relations , with the Good Friday agreement being treated with contempt by many in Westminster.

This week the queen agreed to a “period of transition” in response to Prince Harry and Meghan Markle’s decision to step back from the royal family, adding that she was “entirely supportive” of the pair. It remains to be seen if the tabloid press, which hounded the couple into exile, will be so accepting. For as open minded as the queen can be, the same can hardly be said of all her subjects. If Markle can marry a royal and still fail to be accepted, what chance do the rest of us have?

Beginning with the EU referendum and cemented by Boris Johnson’s brutally conclusive general election victory, Britain is in the midst of a nativist hysteria from which not even the royals are immune. Apologists will argue that Brexit is less a rejection of multiculturalism and more an endorsement of Britishness, but the result is the same. Immigrants are commonly blamed for “not integrating”, but how can we engage with a class structure that is exclusionary by nature?

Perhaps on some level people’s problem with Markle is that she became too integrated - swanning in, breezily leapfrogging over an entire class system and pulling a prince. If only there were some sort of pamphlet produced that could guide us foreigners on how to integrate properly, then horrid misunderstandings like these could be avoided.

The contempt with which Markle is held cuts a blinding contrast with the blanket adoration royals typically enjoy.

To me, the feverish obsession with royal weddings, babies, garden parties and so on is completely alienating. The slavish acceptance of an unelected head of state is unusual. Markle had been positioned as the progressive new face of the royal family, but the brute reality is their subjects were just not having it.

The couple are totally off brand for Brexit Britain. In 2018, they visited Dublin’s Famine memorial and carried themselves with dignity and respect– it’s very difficult to imagine someone like Boris Johnson doing the same. This is a man who has labelled commonwealth subjects “flag waving piccaninnies”, the people of Papua New Guinea “cannibals”, Muslim women “letter boxes”. More likely, he’d stand beside the memorial eating a bag of Walkers crisps and ask aloud why the Famine Irish had not done the same.

Over three years in and I still feel like an outsider as an Irish person living in London.

You become numb to the Irishman jokes after a while. Where once I might have laughed, offered a riposte, or even taken offence, now my eyes just glaze over. It tends to be driven by ignorance more than malice. In my experience many English people see the Irish as either scary terrorist or charming light entertainer, with nothing in between. It’s part of the reason someone like Leo Varadkar was so jarring to some during the Brexit negotiations, like when the Sun said “The Sun has some advice for Ireland’s naive young prime minister: shut your gob and grow up.”

Markle’s departure from the royal family is trivial in importance compared with the UK’s exit from the EU, but they both serve to highlight something fundamentally troubling in the modern British psyche. If the European Union were a house party, Britain would be the guy who produced a guitar and was upset when no one wanted to listen to Wonderwall. Mortally offended at the idea of compromising with others on the party’s music and too tight to contribute towards communal booze, Britain has elected to wander into the night in a sulk.

Even if Brexit works itself out in the end – and I sincerely hope that is does, for everyone involved – the damage to Britain’s image in the world has been done. A pathetic, permanent stain on its reputation, Brexit will define Britishness for a generation. From dishwashers to duchesses, the message is clear – fit in, or get out.

The Sussexes appear to have chosen the latter. The plan now is apparently to take residence in Canada and become “financially independent”. Perhaps there is at least some poetic justice in that – finally, a British royal will know what it’s like to emigrate to the colonies and look for work.

Are Johnson and Cummings implementing the will of the people – or gaslighting them?