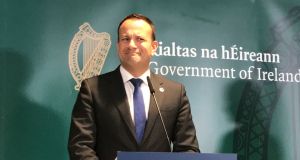 The Government will work with whoever is British prime minister, Taoiseach Leo Varadkar has said, adding that he still believes Theresa May can get her Brexit deal through the House of Commons.

The Taoiseach also denied that he is under pressure from other EU leaders, such as German chancellor Angela Merkel and French president Emmanuel Macron, on how to deal with the Irish Border in a no-deal Brexit scenario.

Mr Varadkar said some “preliminary work” had begun between the State and the EU on how to deal with the Border in such an event.

He said Ireland will have to protect the European single market, but added: “Enforcing and protecting the single market isn’t some nasty European regulation.”

Mr Varadkar stressed it is the State’s single market too, and said he is confident other EU leaders will understand the Irish position.

“In a preliminary way and in a very rough way, some of those conversations have started already, as you would have expected them to have.”

A “huge amount of work with [the] European Commission” has been done on the package of supports that will be in place for farmers, the fishing industry and under-pressure businesses in the event of a no-deal Brexit, he said.

He indicated the Government will more than match any money from the EU, although this will be funded through borrowing.

In a separate interview with RTÉ’s The Week in Politics, he said he believes Mrs May can still get MPs to pass the Brexit withdrawal agreement at Westminster. It comes as speculation intensified in the UK that Mrs May could be replaced as prime minister.

“I think she can [get the deal passed] but one thing I definitely know that I shouldn’t do is interfere in the internal politics of the United Kingdom, ” the Taoiseach said, when asked if Mrs May can still succeed. “Whoever the prime minister is, we will work with that prime minister.

“We have made sure over the past two years that we have had very good links not just at prime minister, at Taoiseach, level, but also between Philip Hammond and Paschal Donohoe, between Simon Coveney and David Lidington and so on. Whoever is the prime minister, we will work with them.”

Mr Varadkar had exchanges with Dr Merkel and Mr Macron over how to deal with the Border in a no-deal scenario at last week’s summit of EU leaders. He denied he is under pressure on the issue.

“I am not sure what people think happens at European Council meetings, but we don’t go there for two days to have dinner. We have robust engagements. People exchange views. Hard questions are asked, hard questions are answered and then we come to a consensus position and then we all stand by that position. That is how European unity works.”

He said “nobody knows” for certain how the Border will operate in a no-deal situation.

The backstop, the insurance policy to avoid a hard Border in the withdrawal agreement, envisages the EU and UK remaining in a customs union, with add-ons for Northern Ireland for customs and regulations.

Mr Varadkar said this was designed to deal with the UK’s Brexit red lines. There could be solutions if the UK decides to stay in the customs union and single market, he said.

“But there isn’t a solution that allows the United Kingdom to have third-party trade deals, for example, and still have a Border open. The only way you get around that then is special arrangements for Northern Ireland.”

Even if the UK leaves the EU without a deal, he said: “We need to look to Britain and say: ‘You still have obligations to keep the Border open.’ You still have obligations under the political declaration that you signed back in December 2017 saying you would maintain full regulatory alignment if you had to keep the Border open.”

He also criticised British Labour leader Jeremy Corbyn’s proposal for a customs union as “cake and eat it as well”.

“It is a customs union but still [has] the ability to have state aids and so on.”