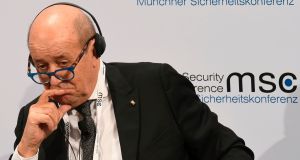 Britain and the European Union are going to “rip each other apart” in talks over a future trade deal, French foreign minister Jean-Yves Le Drian has predicted.

Mr Le Drian said he held out some hope that UK defence co-operation with Europe will continue after it leaves the bloc.

Speaking at the Munich security forum, he said it would be tough for Britain to achieve its aim of a free trade deal by the end of the year given the differences between the two sides.

Mr Le Drian added that on his desk in his office he had massive files showing the issues of contention between the UK and France, including over fishing rights. He said it was normal in negotiations for each side to protect their interests.

Britain formally left the EU two weeks ago but is still trading as a full member during a one-year transition period. The remaining 27 EU states are drawing up their mandate for the talks on the future relationship, and France, determined to bring about greater EU integration, is likely to be leading calls for a tough stance on issues such as financial services and fishing.

France and several other countries – including Ireland – want to be able to keep fishing in British waters, while London wants full autonomy and limited access for European fishermen.

“Let us hope that it is done as quickly as possible even if there are many subjects and that we have substantial points to manage,” said Mr Le Drian. “I have one in particular (...) which is the question of fish”.

Mr Le Drian is former president of the Brittany region, a very important fishing area in France. Nearly 30 per cent of the turnover of French fishermen relies on access to British waters.

Margrethe Vestager, the European Commission vice-president, also praised the EU for refusing to split in the first round of Brexit talks saying “this had not been due to the lack of temptation”.

She said absolute transparency about the commission’s objectives had been critical to retaining that unity, and said the same would happen in the second round of talks.

Mr Le Drian’s remarks were made in the context of his appeal as a former defence minister for continued British co-operation on security and defence issues with Europe after Brexit.

In a sign France is eager to avoid a rupture, he said his country and the UK would be meeting soon in the Lancaster House framework, the Anglo-French defence format first sealed in 2010 by David Cameron and Nicolas Sarkozy.

Sir Mark Sedwill, the UK national security adviser and the sole British speaker at the conference, predicted the UK would continue to co-operate on defence.

Pressed on whether the UK would back the Franco-German proposal for a European security council in which the UK participates, Sir Mark said the institutional structure was less important than the substance of the defence co-operation.

In earlier preliminary warnings of tough talks ahead, the EU chief negotiator, Michel Barnier, told London not to kid itself about EU access for its prized financial services sector. Mr Barnier firmly rejected a British suggestion that City of London companies could be given broad, permanent access to the EU market. - Guardian