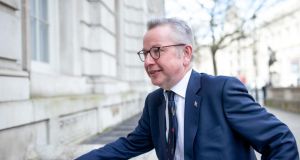 Michael Gove arriving at the Cabinet Office in London. The British cabinet minister said an EU-UK joint committee would determine how the Northern Ireland protocol should work. Photograph: Luke Dray/Getty

Michael Gove, the British cabinet minister who will negotiate the implementation of post-Brexit arrangements for Northern Ireland, has declined to confirm that checks will be required on goods crossing the Irish Sea from Great Britain to the North.

Mr Gove told a House of Commons committee that it would be for an EU-UK joint committee to determine how the Northern Ireland protocol should work.

“The effective working of the protocol is a matter for the joint committee to resolve and I’m looking forward to that meeting in order to ensure that we can develop the protocol and implement it in all its provisions in a way that ensures that the people of Northern Ireland and the Northern Ireland economy benefit,” he said.

EU negotiators insist that the role of the joint committee, which is due to meet for the first time on March 30th, is limited to determining matters such as which goods are assumed to be destined to remain in Northern Ireland rather than exported to the EU. But the protocol makes clear that Northern Ireland will have to follow the EU customs code, which requires information and checks on goods coming from Great Britain.

Prime minister Boris Johnson has stated a number of times that there will be no checks and no border in the Irish Sea but Mr Gove said the British government was committed to implementing the protocol in full.

“We are committed to making sure that the Northern Ireland protocol is implemented in order to underpin the Belfast/Good Friday Agreement. And the point is well understood that the joint committee is there to ensure that it is implemented and also to resolve some of the questions over precisely how,” he said.

Mr Gove suggested that the next round of talks between Britain and the EU, which is scheduled to start in London next Wednesday, could be postponed because of the coronavirus outbreak. And he said the government would not publish an economic impact assessment of the free trade deal it is seeking from the EU.

“I am personally sceptical of efforts to say that any given impact assessment by a government department is an accurate prediction of the future. As load-bearing devices go, they are perhaps not the most effective ways of delivering a proper range of views about what the economic consequences of a course of action might be,” he said.