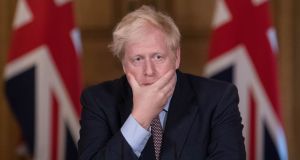 Boris Johnson’s decision to proceed with legislation that has plunged trade talks with the EU into crisis has prompted concern among some Conservatives. Photograph: Stefan Rousseau/PA Wire

Boris Johnson has told Conservative MPs that legislation that will break international law by rewriting parts of the Brexit withdrawal agreement is necessary “to stop a foreign power from breaking up our country”.

Addressing his parliamentary party in a video call, the prime minister urged the MPs to support the UK Internal Market Bill which the House of Commons starts debating next Monday.

“We must not go back to the miserable, squabbling days of last autumn,” he said.

Three former Conservative leaders and a number of the party’s senior backbenchers have warned against proceeding with legislation that the government has admitted would break international law. The number of rebels is estimated to be too small to defeat the Bills in the Commons but they could be amended or delayed in the House of Lords.

The European Union has threatened legal action if Britain does not withdraw the Bills by the end of September but British government sources on Friday played down the likely impact of the row on negotiations towards a free-trade agreement.

British negotiators will travel to Brussels next week for more talks and the view in Downing Street is that states often find themselves in dispute over one issue while negotiating over another.

“Talks this week have been relatively more constructive than you might expect, but ultimately progress will be determined by whether we get more realism from them on the key areas of divergence. Whilst we are beginning to get discussions of substance of some issues, big important areas remain unresolved. We will carry on talking in Brussels next week,” a senior British negotiating official said.

“The right to export is the absolute basis for a relationship between two countries that trade agricultural goods. It is a licence to export and entirely separate from the issue of food standards. It would be very unusual for the EU to go down this route and deny the UK listing,” a British government spokesman said.

The Bills would allow British ministers to decide which goods moving from Great Britain to Northern Ireland are deemed at risk of proceeding into the EU single market and what paperwork should accompany goods moving in the other direction. Ministers would also determine the scope of the protocol’s demand that Britain should notify the EU about subsidies to business that affect trade between Northern Ireland and the EU.

Earlier, Minister of State for European Affairs Thomas Byrne said: “It is completely wrong to say that this is to protect the Good Friday Agreement.

“In fact, the opposite is the case. I think that what should happen now is that the UK should withdraw these particular legal provisions that they propose through an Act through parliament.”

Speaking on BBC Radio 4’s Today programme, he added: “What they propose to do is put at serious risk the basis of the peace on the island of Ireland.

“And the basis of our trade, and unfettered trade, cross-Border in goods which is absolutely essential for that peace.”

The EU stepped up planning for a “no-deal” Brexit on Friday after Mr Johnson’s government refused to revoke a plan to break the divorce treaty that Brussels says will sink four years of talks.

The EU has demanded that Britain scrap by the end of this month the plan to breach the divorce treaty. Britain has refused, saying its parliament is sovereign above international law.

“As the United Kingdom looks to what kind of future trade relationship it wants with the European Union, a prerequisite for that is honouring agreements that are already in place,” said Pascal Donohoe, chairman of euro-zone finance ministers.

“It is imperative that the government of the United Kingdom respond back to the call from the [European] Commission.”

As the atmosphere soured between London and Brussels, Japan and Britain said they had reached agreement in principle on a bilateral trade deal that meant 99 per cent of the Britain’s exports to Japan would be tariff-free.

Investment banks have increased their estimates of the chances of a messy end to Britain’s exit from the trading and political bloc it first joined in 1973, and sterling has fallen against the dollar and the euro.