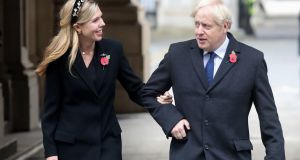 Boris Johnson has ruled out removing treaty-breaking clauses in a Bill that would allow British ministers to renege on the Brexit withdrawal agreement despite Joe Biden’s victory in the United States presidential election.

Mr Biden has warned about the risk the Internal Market Bill poses to the Belfast Agreement and the peace settlement in Northern Ireland, threatening to sink the prospects of a US-UK trade agreement.

But in a call with European Commission president Ursula von der Leyen on Saturday, Mr Johnson said he intended to press ahead with the Bill in its current form.

“As I told Ursula, the parliamentary timetable goes ahead. The whole point of that Bill and indeed the finance Bill is to protect and uphold the Good Friday Agreement [Belfast Agreement] and the peace process in Northern Ireland. And again, that’s one of the things that we’re united on with our friends in the White House, ” he told the Associated Press on Sunday.

The House of Lords is expected to throw out the offending clauses on Monday but MPs can restore them when the Bill returns to the House of Commons later this month. Mr Johnson’s government has admitted that the clauses would allow British ministers to break international law by reneging on the withdrawal agreement and the Northern Ireland protocol which ensures that there will be no hard border between North and South.

Mr Biden has publicly backed warnings from leading congressional Democrats including House speaker Nancy Pelosi and ways and means committee chairman Richard Neal about the impact on London’s relationship with Washington if it presses ahead with the Bill as it stands. But foreign secretary Dominic Raab said on Sunday that it was the EU rather than Britain that was putting pressure on the Belfast Agreement with its approach to implementing the Northern Ireland protocol.

“We’ve unconditionally and absolutely committed not to doing anything to imperil the Good Friday Agreement and any infrastructure at the Border. The EU hasn’t replicated that absolute commitment and that’s something which I think has been helpful to explain to our American friends,” he told the BBC.

Mr Johnson and Ms von der Leyen agreed that talks on a post-Brexit agreement should continue in London from Monday, although both sides acknowledged that significant differences remained on the two main outstanding issues.

“Some progress has been made but large differences remain especially on level playing field and fisheries. Our teams will continue working hard next week. We will remain in close contact in the next days,” Ms von der Leyen said.

Mr Johnson said on Sunday that Ms von der Leyen agreed with him that a trade deal was within reach.

“I’ve always been a great enthusiast for a trade deal with our European friends and partners. I think it’s there to be done, the broad outlines are pretty clear. We just need to get on and do it if we can,” he said.