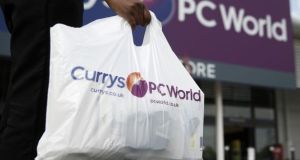 Irish customers of Currys/PC World have been hit with a fresh setback after orders were cancelled by the shop because of what it described as “teething issues caused by a change in delivery processes”.

It is the third Brexit-related problem to beset the electronics retailer since the beginning of the year.

Many of its customers have been forced to contend with delivery delays of more than three weeks as a result of the decision by the logistics company used by the retailer to suspend deliveries to the Republic for weeks while it sorted out issues related to Brexit.

That was just the start of a difficult month for Currys/PC World.

A large number of customers who did manage to have products delivered were less than pleased when they were hit with VAT and other taxes and charges, sometimes in excess of €200, despite the fact they bought products from its Irish-based site.

The company subsequently admitted the taxes and charges were imposed in error and it has said customers who where charged in error have been refunded.

However in the latest issue, Currys/PC World systems have unilaterally cancelled some customers’ orders blaming what it said were Brexit-related teething issues.

“All impacted customers are currently being contacted to apologise and to let them know their order has unfortunately been cancelled,” a spokeswoman told The Irish Times. She said the retailer was “working hard to refund them as quickly as possible”.

The spokeswoman stressed that it would honour “any promotional sales prices” if people wish to re-order their products even though the sales periods will most likely have come to an end.

“We are also offering a €30 e-voucher to apologise for the inconvenience,” she said and she added that the “issue has now been resolved for future orders placed at currys.ie”.

With regard to the customs issues that it had last week, she said that all orders are shipped from its central distribution centre in Newark, England.

She said the retailer was “working hard to contact affected customers and refund them any duty paid” and she reiterated that “no Irish customers will have to pay duty on orders”.

She concluded by saying that DPD European Road Services have now resumed deliveries. “There is a slight backlog due to the pause in services, however this issue is resolved.”