Brexit is a triumph of European solidarity – for now 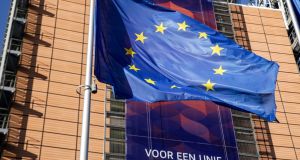 An EU flag flies in front of the European Commission headquarters in Brussels. Photograph: Aris Oikonomou/AFP

The British will go to the polls on December 12th to break the deadlock over Brexit. If the result reaffirms the 2016 referendum it will be because a decisive pro-Brexit vote will have been cast in England for the second time. This is why Brexit is a misnomer. It should be labelled Engxit for England’s exit from the European Union.

Engxit will confirm that many English people never warmed to their membership of what they regard as a “continental” club. Contrast this with Ireland’s European journey. For Ireland, EU membership promised national empowerment through escaping the British shadow.

British influence would be diluted through mutual membership in a club whose rules would be set collectively and whose members included countries as powerful as Britain. And by seizing the opportunities of the single market, the Irish economy would no longer be an appendix of the British economy.

So for Ireland, being part of integrated Europe has been an emancipatory experience that has enhanced national sovereignty. Just like in Germany. After the second World War, militarily defeated and morally devastated Germany was occupied and divided into two parts. Under the tutelage of France, the UK and above all the United States, West Germany gained sovereignty through its integration into Nato and the precursors of today’s European Union. For Germans, as for the Irish, national and collective European sovereignty are two sides of the same coin.

These two sides are not in perfect harmony. The EU is a union of nation states. For both Ireland and Germany national interests and European exigencies can be difficult to reconcile.

It is all the more remarkable that throughout the Brexit drama, the EU 27 have presented a united front to London. Brexiters gravely miscalculated, not least in their expectation that Berlin would accommodate them at the expense of EU partners, Ireland being the most vulnerable among them.

Thus, if Brexit happens, tragically English nationalism will have won the day. Yet Brexit will also represent a triumph of European unity in the face of such nationalism and of solidarity with an Irish neighbour.

Converting this momentary triumph into lasting success will be the key post-Brexit challenge. It consists of two parts. First, there is the more narrow challenge of establishing a long-term relationship of mutual benefit to London and the EU. Again, the stakes will be particularly high for Ireland because of the conflict-prone border issue and economic links with Britain.

The broader challenge is to reinvigorate our European project. It is both an end in itself as well as a means to meet the first part of the post-Brexit challenge. For more than three years, Brexit has preoccupied minds and consumed plenty of energy. It is time to widen the horizon and devote more attention and resources to creating a European Union fit for the 21st century.

For we live in an era of disruptive and demanding change: reconciling globalised and digital capitalism with sustainable prosperity and social justice; repelling the populist onslaught on democracy; defending our European values and interests in a world dominated economically by American and Chinese digital behemoths and determined politically by (Trump or no Trump) a crumbling transatlantic partnership as well as an American rivalry with an ascendant China. Add to this a Putin Russia that cannot be trusted, a migration-prone Africa in our European vicinity and a persistent terrorist threat.

If united Europe did not exist, we would have to create it to seize the opportunities and contain the risks inherent in these developments. On their own, even countries such as Germany or, as Brexiteers will discover, the UK are midsized compared to global state or non-state actors such as Google, Facebook and Amazon or their Chinese equivalents. Europe is the power multiplier that enables us to stand up to them and create a level playing field in the global economic and political arena.

Such a Europe requires shared sovereignty and reciprocal solidarity. In this regard, the status quo will not suffice. We need to integrate further for a strong Europe – be it at 27 or in smaller groups.

This has one immediate and two longer-term implications. Ongoing negotiations about the next seven-year EU budget might have to be finished under the German presidency in the second half of 2020. As net payers, Germany and Ireland will be called upon to participate in plugging the hole caused by Brexit.

The first of the more far-reaching implications is to reinforce the euro zone through enhanced solidity and solidarity. Sound public finances, private-sector competitiveness and enforcement of agreed rules are the key ingredients of solidity, whereas enhanced solidarity necessitates a sizeable budget, collectively funded backstops for national unemployment and deposit insurance schemes as well as effective and fair tax regimes.

The second longer-term implication is that it will become ever more difficult to compartmentalise European integration. A more resilient euro zone will benefit our economies, improve the functioning of the single market and diminish the role of the dollar or a future Chinese global currency. More resilience implies more solidity and solidarity. Will euro members be willing to provide them if they feel abandoned by other members on issues such as border protection and the intake of refugees? Similarly, flouting fundamental norms such as the rule of law by some member states is even more intolerable when these states participate in overruling others through majority voting procedures.

So there is a demanding agenda besides and beyond Brexit. To borrow a phrase from a cunning Brexiteer: it is high time that we, the EU27, get it done. Only then will the triumph be a lasting one and a British re-entry a promising prospect.

Eckhard Lübkemeier is a former German ambassador to Ireland