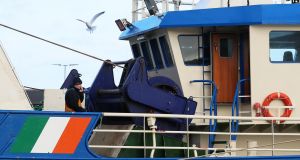 New proposals from the EU to reach agreement in Brexit trade negotiations with the UK would be a “death knell” for the Irish fishing sector, an industry group has warned.

The latest movement in the talks has seen EU negotiator Michel Barnier propose to hand back 25 per cent of the value of fish caught by EU boats in British waters to the UK, according to reports.

Seán O’Donoghue, chief executive of Killybegs Fishermen’s Organisation, who represent Donegal fishermen, said the concession would be an “unmitigated disaster” for the Irish fishing industry.

Previously the EU position had been an offer to hand back between 15 and 18 per cent of the value of fish caught by EU fleets in British waters to the UK.

Speaking on Saturday, Mr O’Donoghue, head of the major industry group, said the fishing sector had been “thrown under the bus” in the talks.

The Irish fishing industry would be hit hardest by the proposed deal of all the EU Member States, he said. “We are being the sacrificial lamb of the trade negotiations . . . This is akin to no-deal for us” he said.

The reported concessions to hand back 25 per cent “absolutely” gave too much to the UK side, he said.

“This is the death knell to the fishing industry,” he said, estimating the impact could cost 5,000 to 6,000 jobs in Ireland.

“The shape of a deal, as currently stands will spell the ruination of the Irish seafood sector which directly supports more than 16,000 jobs and is worth more than €1.2 billion annually to the Irish economy,” he said.

“Our industry is literally and metaphorically on the brink and in spite of repeated promises made, we are in the throes of being sold down the river,” he said.

“The one thing we wanted to avoid was a ‘no-deal’ situation in the interests of all our fishermen but the deal which is now being proposed is every bit as bad. We are looking at vicious and unprecedented cuts on our pelagic, shellfish and whitefish stocks,” he said.

Fishing has emerged as one of the key sticking points in the ongoing negotiations to agree a trade deal between Britain and the EU, with talks entering the crunch period in recent days.

The current proposal on fish from Brussels was “galling,” Mr O’Donoghue said. He called for the Government to “stand up for its fishermen.”

“While our industry has faced down many serious, serious challenges down through the years and has proven itself to be resilient, versatile and determined, this is a desperate slap in the face and potentially the single-biggest and most catastrophic setback of our time,” he said.

Farmers in Ireland and Britain have reaffirmed the importance of avoiding a no-deal Brexit, to the agriculture sector.

President of the Irish Farmers Association Tim Cullinan and the president of the National Farmers Union of England and Wales Minette Batters appealed to both sets of negotiators in the Brexit talks to remain steadfast “in pursuit of an agreement”, for the future trading relationship between the EU and Britain from January 1st.

In a joint statement the two leaders reiterated their “firm commitment to the adherence to world class standards that underpin food production in the UK and Ireland”, and insisted that any future deal should guarantee full recognition of these standards.

“Trade on the island of Ireland, and the trade flows east-west and west-east, are important to the economies on these islands. Every effort must be made to safeguard trade in agri-food goods, which plays a crucial role in the prosperity of rural communities,” the leaders said.

Reaffirming their commitment to working together for the benefit of Irish and British farmers, the two leaders held a remote meeting on Friday to discuss the latest developments in the Brexit talks.

The two farm leaders have remained in regular contact during the Brexit negotiations, given the significance of the talks for farmers and the wider agri-food industry.