Brexit: Firms in Britain warn they will no longer supply goods to North

Some customers told they will have to bear carriage costs themselves 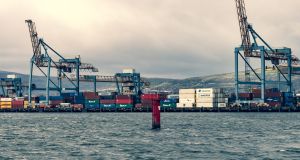 The container dock at Belfast Harbour. Some British-based companies have warned they will no longer supply the North after the end of the year. Photograph: iStock

British-based companies are warning businesses in Northern Ireland that they will stop supplying them with goods after the UK leaves the EU on January 1st, it has emerged.

The British government will impose customs checks between Northern Ireland and Britain following the end of the Brexit transition period at the start of next month, while the Border between the North and the Republic will remain open.

The move has prompted some British-based companies to tell business customers in the North that they will no longer supply them, or to ask them to cover shipping costs themselves.

All commercial goods shipped to the North from Britain will require customs declarations from January 1st under the new regime, although the UK government has said that it will seek ways to minimise this.

British suppliers are telling customers in Northern Ireland that they fear the post-Brexit changes will boost shipping costs and possibly add import duties to goods they send to the region.

The owner of one builders’ merchant business based in the North confirmed that several British suppliers had contacted him in recent weeks to say they would no longer supply customers in the North, or would ask his company to bear shipping costs.

In another, a British-based company says that customers in Northern Ireland will have to bear “all carriage costs and any import duties”.

The firm says it will ship the goods once it gets confirmation that the costs will be covered. The supplier also offers to arrange to have the customer’s own couriers collect the goods.

The businessman, who asked not to be named, pointed out that most suppliers have been operating without any border. “It’s a completely new thing to them,” he added. “There has not been a border for 15 years or more.”

It will mean customs checks on goods entering the North from Britain, and extra paperwork for those shipping the products.

The businessman suggested that some British companies had decided that Brexit meant it was not worth their while continuing to do business in the North, as it is a relatively small market, with a population of about 1.5 million.

He predicted that the problem could leave his business without products needed by customers, or force the firm to buy the same goods from the Republic at a higher price.

The businessman explained that sourcing replacement supplies from the Republic was more expensive as his company had to deal with agents, while in Britain it bought directly from the manufacturer.

On Tuesday, Northern Ireland’s chief vet, Dr Robert Huey, said about 40 lorries a day carrying food and farm products from Britain would be subject to checks by Department of Agriculture staff.